The price of silver made a valiant effort to rally twice last week, but to no avail. Rather than head toward gold and silver as safe havens, investors favored the U.S. dollar.

The U.S. Dollar Index (DXY) made another run towards 95.5, punishing silver prices and a host of other commodities along the way.

The main driver seemed to be investor concern over trade wars. That has pushed the dollar higher against the Chinese yuan, the euro, and currencies of several commodity-exporting and emerging-market nations.

But U.S. President Donald Trump is known for using aggressive negotiating tactics, squeezing his opponents, and then retreating somewhat as an act of compromise. In this type of scenario, trade wars could end in a flash, removing the attraction of the dollar and allowing commodities to soar.

That would do wonders for the price of silver and silver miners, helping them soar as the dollar weakens.

So keep an eye on the trade wars, as they could provide a long-needed catalyst for silver prices.

Before we get to my outlook for silver prices in 2018, here's how the metal is trending this week... 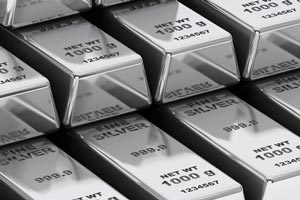 Silver began last Tuesday, July 31, laden with weakness, oddly enough selling off with the DXY early in the day. But even as the dollar bounced, pulling the dollar index up to 94.5, silver jumped as well, reaching $15.54.

But the next few days would prove challenging as the dollar index steadily climbed. By Friday morning, it had reached 95 on news the United States was threatening to up tariffs from 10% to 25% on $200 billion worth of Chinese goods. As China promised to retaliate, the DXY rose past 95 and silver reversed, rallying to $15.50 by 11 a.m., and then settling to $15.38 by the close.

Here's the DXY action for the past week: 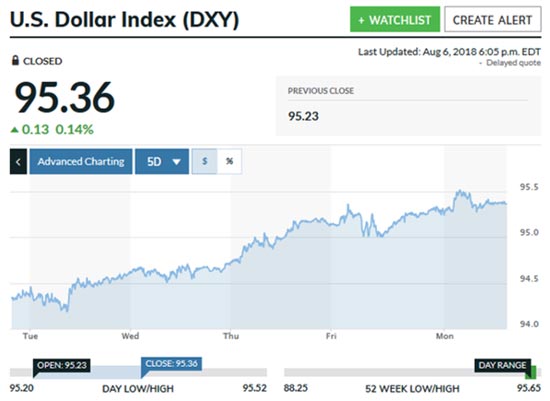 On Monday, earnings optimism drew capital toward stocks and bid up the dollar.

Where the Price of Silver Is Headed Now