You'd think that now, with Apple stock over $200 and the company market cap north of $1 trillion, would be time for investors to move on.

Not on your life.

Editor's Pick: The 10 Most Profitable Stocks to Buy While the Trade Wars Rage 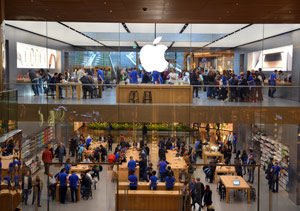 But selling all of your Apple stock would leave money on the table. And for investors who don't currently hold any Apple shares… it's not too late to extract profits from this extraordinary company.

Of course, you wouldn't know that judging by what the Wall Street analysts are saying. The consensus target price for AAPL over the next 12 months is a paltry $215.46 according to Yahoo Finance, and an even more paltry $211.99 according to FactSet.

The trouble is, this group has a long history of underestimating Apple as well as overreacting to negative news and even negative rumors.

This is an embarrassing track record….

Why You Can't Trust Wall Street on Apple Stock Predictions

In the six weeks prior to Apple's Q2 earnings report, shares fell 10% as Wall Street anticipated a steep drop-off in sales of the iPhone X.

One firm, Mirabaud Securities, actually declared the iPhone X "dead" and suggested Apple abandon the model in favor of a return to the iPhone 8 design.

As it turned out, iPhone sales rose 3% from the same quarter a year earlier while revenue was up 14%.

In May of 2016 Wall Street again was handwringing over iPhone sales. And they were wrong then, too.

So I'm not buying today's conservative outlook. In fact, I believe AAPL is headed for $300 within two years – a nearly 44% gain from the current price of $209.

It's not far-fetched when you look at these numbers…

AAPL Stock Will Rise with Earnings

Despite the frequent palpitations over things like "peak iPhone," Apple's earnings are expected to continue growing at a healthy pace over the next couple of years.

With that kind of earnings growth, Wall Street's one-year price targets just a few dollars above the current Apple stock price of $208 look ridiculously low. Shares of AAPL are more likely to be closing in on $250 a year from now.

It's much more likely than you may think. Previous long-term analyst forecasts have missed by far more…