The price of silver didn't move much early last week, but the events in Turkey have since pushed the metal even lower.

For its part, the U.S. dollar index (DXY) consolidated as well, but then it rallied before exploding higher late in the week.

Serious pressure on the Turkish lira, which bled into emerging markets, acted like steroids on the dollar. Initially, silver prices sold off but quickly reversed as silver benefited from safe-haven buying, as did the dollar.

That pulled the price of silver to lows not seen since early 2016, aggravating an already tired and extended silver bear market. 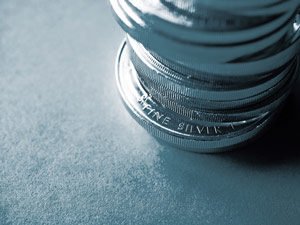 Silver bulls pinned their hopes on gold, which seemed to return to safe-haven status even as the DXY surged higher. But that too has since faded with gold, making a new low near $1,200.

Here's a look at how silver prices are trending now - and whether we've finally reached a bottom for the precious metal...

Here's Why the Price of Silver Keeps Dropping

Like I said, silver saw little action early last week as both the dollar and gold moved within a pretty steady range. Silver's lower limit was $15.30, touched early Wednesday, and its upper limit was $15.49 on Thursday morning.

Then as Friday morning rolled around and investors around the world began reacting to news that European banks were concerned about their exposure to Turkey, the silver price initially dropped from $15.42 on Thursday's close to $15.32. But buyers then stepped in to acquire silver as gold and the dollar also rose. That bid silver up to a peak of $15.42 before it retreated once again.

Here's a look at the DXY for the past five trading days: 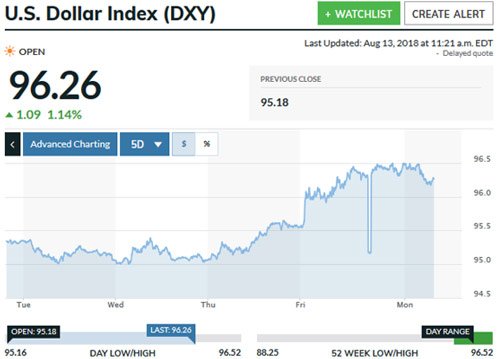 Friday's close would see silver dragged down to $15.23 as participants sold before the weekend.

And on Monday, as stocks eventually sold off on further emerging market contagion concerns, the DXY consolidated around 96.4. That hurt silver even more, pushing the metal below $15 to $14.95 by late afternoon.

Now that silver is trading below $15, here's where I think the precious metal is headed next...