A rapidly growing economy suddenly collapses. The local currency loses half its value in a matter of days.

Panic spreads across similar economies, wiping out billions of dollars in shareholder wealth. The New York Stock Exchange halts trading as the Dow slides 7% in one day.

International bailout packages of over $100 billion are hastily cobbled together to stop more economies from falling.

The affected economies are saddled with a decade of lost growth.

It's the exact scenario that played out in 1997 when the Thai baht collapsed, sending southeastern Asian economies into a decade-long tailspin.

And it could be happening again...

Turkey's Economy Is in a Dramatic Freefall

The Turkish lira lost nearly half of its value relative to the dollar between the start of the year and this week (Aug. 13).

While the value of Turkey's currency slid throughout the year, it went into complete freefall on July 23, losing 33% of its value in a matter of weeks.

Plus, the hit to the Turkish currency is rippling across its entire economy.

The overall valuation of Turkey's stock market has collapsed too. The crisis is bad enough to rival the 2008 global financial crisis. 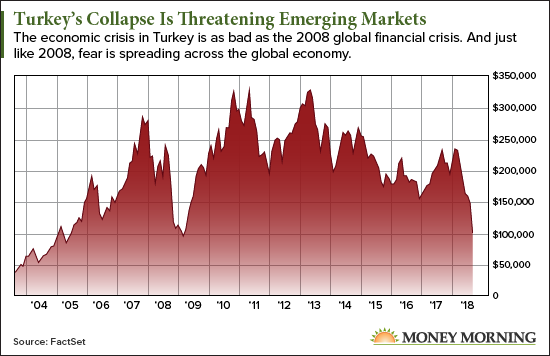 The collapse is nearly as steep as the 2008 financial crisis, and it puts Turkey's stock market right back where it was at the bottom of the 2008 disaster.

With such a sudden and dramatic collapse, it's no wonder the media is focusing on Turkey's economy this week. But the real threat is if this crisis spreads to other countries in what economists call a contagion.

And despite a slight 14% recovery for the lira over the last two days, the events causing the crisis haven't changed, which threatens its potential to spread even further...

Two events swirled together, creating the perfect economic storm in Turkey, and they're showing no signs of letting up.

The country needs sustained economic growth to service these debts, but stagnant growth and soaring inflation have weakened the country's ability to attract foreign investment.

Turkey has retaliated with sanctions of its own, including a new proposal to boycott the iPhone and other American technology.

The fact that Turkey is doubling down on combating foreign money is a bad omen for its ability to sustain its massive debt without an international bailout.

Erdoğan has forced the central bank to keep interest rates artificially low against the advice of his economic advisors and the International Monetary Fund. In early May, he threatened to take over the central bank if it didn't hew to his wishes.

The Turkish lira slid 12% between May 1 and May 24 as Erdoğan ratcheted up his threats.

But a crisis was averted when the central bank hiked rates in June, showing that it still operated independently.

On July 24, the central bank refused to raise interest rates despite all expectations it would (and needed to). The lira slid another 33% between July 23 and today (Aug. 16).

The decision not only led the lira to lose a third of its value, but Turkey's natural gas provider hiked prices in response to the lira losing value, deepening the economic recession.

And Erdoğan's response has been to encourage his supporters to continue relying on the lira instead of exchanging it for more stable currencies like the dollar. Some activists have even gone so far as to burn dollars in the street in support of the president's demands.

It's clear Erdoğan isn't backing down, and without major changes, the turmoil won't end.

The reality is the crisis is going to spread, and it could put a dent in your wallet...

What the Turkey Contagion Means for Your Money

The crisis in Turkey is shaping up to be every bit as bad as what happened in Thailand in 1997.

And just like the 1997 Asian Flu crisis, this one has a serious chance of spreading to other emerging economies.

In fact, it's already started.

Over the last week alone, the Argentine peso lost 8% of its value, the South African rand fell 8%, the Colombian peso lost 6%, the Russian ruble slid over 6%, and the Indian rupee fell 7% - a record low.

The JPMorgan Chase & Co. (NYSE: JPM) Emerging Market Currency Index is down 15% already and is still in freefall.

It's not just emerging market currencies either – the crisis is spreading to stock markets as well.

Saudi Arabia's stock market is down 7% since July, Russia's is down 5%, and Argentina's slid 11% since August began, putting it into official correction territory.

The Vanguard Emerging Markets Stock ETF (NYSE Arca: VWO) is down nearly 20% from its 2018 high.

And even if you aren't directly invested in Turkey, your portfolio could be exposed to the fallout.

Consider Micron Technology Inc. (Nasdaq: MU) and NVIDIA Corp. (Nasdaq: NVDA) - these are some of the hottest tech stocks on the market. They each do more than 72% of their sales in emerging markets.

Similarly, financial titans like Citigroup Inc. (NYSE: C) and Morgan Stanley (NYSE: MS) have substantial exposure to the BRICs (Brazil, Russia, India, and China). More than a third of Citigroup's business comes from these emerging economies.

It's not easy to find companies with no global exposure.

That's part of the reason why the Dow is down 2% over the last five days.

But that dip could deepen if a European country's economy falters too.

Greece, Italy, Portugal, and Spain are potential candidates, and if the contagion reaches their markets, the rest of Europe's economy could stumble along with them. We already saw a preview of that during the 2015 Greek debt crisis when the Dow slid nearly 10% over the summer of 2015.

Investors simply can't afford to be complacent or ignore what's going on in an economy half the world away.

And when the crisis eventually hits our shores, it could be one of the biggest ever...