When major indexes drop like this, it's normal to wonder if this is the beginning of a long-term sell-off.

However, there's no reason to panic. 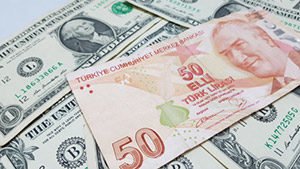 While there is a chance that Turkey's economic troubles could spread to global markets, stocks are likely pulling back for a much different reason.

In fact, it's setting Money Morning readers up for a tremendous buying opportunity...

Turkey Is Unique Among Emerging Markets for All the Wrong Reasons

Concern over Turkey's currency collapse revolves around the possibility of "contagion" - the idea that Turkey's economic instability could spread to other emerging markets.

You see, Turkey is one of several emerging market countries that rely on foreign, dollar-denominated borrowing to prop up their growth.

Rising American interest rates have put pressure on the economic health of these nations as they struggle to keep inflation in check. As a result, Turkey's recent crisis could be emblematic of the troubles creeping up on other emerging markets.

However, there is strong evidence that Turkey's currency crisis is an isolated case, unlikely to spark a "domino effect" across other developing economies.

The truth is few other developing countries are plagued by the magnitude of debt Turkey faces.

Turkey has one of the largest current-account deficits of any emerging market. When a current account is in the red, it means that a country is spending more on imported goods than it takes in from sending goods abroad.

This makes Turkey highly dependent upon capital flowing into the country - any minor change is this flow is likely to rattle the nation's domestic markets.

However, India's economy is three times the size of Turkey's. So, India is expected to absorb this deficit in a way Turkey cannot.

These twin debt loads make the "Gateway to Asia" uniquely susceptible to the kind of economic turmoil investors have witnessed over the last week.

However, the question remains - if Turkey's unique case makes contagion unlikely, why are American stocks seesawing between steep declines and fresh gains?

The answer is simpler than you think...