Access Your Profit Alerts
Sign Up for Money Morning and get your free report:
"The Best Stocks to Buy Now"
How to Buy Bitcoin
Twitter
Stocks: amzn, GRPN

Top management for Groupon Inc. (Nasdaq: GRPN) has begun looking for a buyer, raising questions about what major company might want to buy Groupon. 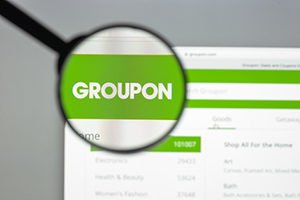 Groupon shares surged 12% on July 9 amid news that the company was hunting for a buyout.

The online discount provider has operated as an independent company for 10 years, but this run could end if it finds a buyer.

And some are speculating Amazon.com Inc. (Nasdaq: AMZN) will make GRPN an offer…

Here's Why Amazon Could Buy Groupon

It's possible Amazon could buy Groupon, but it's unlikely.

You see, Amazon once owned a sizeable chunk of one of Groupon's main competitors, LivingSocial Inc.

Groupon acquired LivingSocial in 2016 thanks to low revenue and hacking issues.

Amazon also had its own service that offered deals but shuttered that operation in 2015.

A more likely contender to buy Groupon could be Alibaba Group Holding Ltd. (NYSE: BABA), which already owns 5.6% of the company.

This means that it wouldn't cost BABA as much to acquire a controlling interest in GRPN.

Another company to consider is InterActive Corp. (Nasdaq: IAC) because of its connections to Groupon. The company's CEO, Joey Levin, has been on Groupon's Board of Directors since 2017.

Buying Groupon stock now in the hopes of a large payoff would be a speculative trade at best, considering the company hasn't found a buyer.

But as we've seen with Amazon's acquisition of Whole Foods, companies are willing to pay a premium over what a company is currently worth.

If You Want Proof You Can Make Over $100,000 by Rolling Stocks Over and Over Again… Pay Close Attention