"Don't follow the herd" is essential to any contrarian investing strategy. 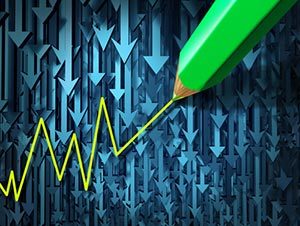 Contrarian investors studiously avoid "groupthink" when it comes to searching for undervalued investments that will maximize their returns.

The latest evidence to show the power of contrarian positions comes from a new research report by Deutsche Bank AG (NYSE: DB).

The study looked at how the rebalancing of exchange-traded funds (ETFs) affected the returns of the component stocks being bought and sold.

The researchers were looking for a way to exploit the idea that "passive" investments like ETFs - in which stocks are bought and sold to match a formula rather than on a thorough analysis of company fundamentals - distort pricing.

"The proliferation of passive investments is causing distortions," Ronnie Shah, Deutsche Bank's head of U.S. quantitative equity strategy and one of the report's authors, told Bloomberg. "It's a new anomaly associated with ETF flows that active managers can take advantage of."

Because passive investing doesn't take into account the full range of information available on a stock - everything from the latest earnings report to rumors about a possible merger - it bypasses the usually efficient price discovery mechanism of the markets.

Deutsche Bank discovered a contrarian phenomenon that, when properly managed, can double profits.

Deutsche Bank discovered an exaggeration in pricing that works both ways.

But Deutsche Bank discovered these distortions are temporary. Within a few months, the price discovery action of the markets returns stocks to appropriate levels.

That means buying stocks with high ETF outflows should results in short-term gains. And the research shows it works. 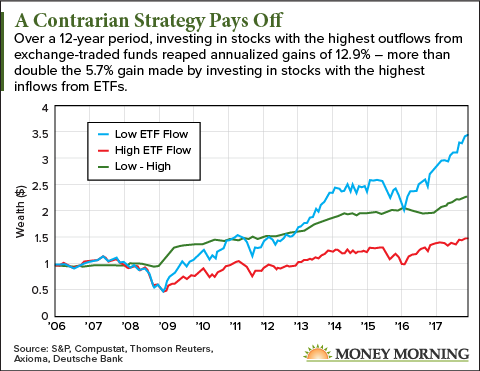 The results (compared to a hypothetical portfolio that "follows the herd" - one that bought stocks with the highest ETF inflows) were dramatic.

Converted to annualized gains, the contrarian strategy resulted in gains of 12.9% per year compared to 5.7% for the "herd" strategy.

While putting this particular strategy into practice would be difficult for a retail investor, it's a great illustration of how effective a contrarian approach can be.

And there are plenty of other contrarian ideas you can put to use...

Here at Money Morning, we're fortunate to have an expert in contrarian investing in our midst - Money Morning Executive Editor Bill Patalon, who writes the Private Briefing investment advice column.

Patalon co-wrote a book on the topic, "Contrarian Investing: How to Buy and Sell When Others Won't and Make Money Doing It," which was published in 1998. You can still buy it on Amazon.com.

"Most folks believe contrarian investing means that you are always at odds with the prevailing wisdom... that's wrong," Patalon told me. "It means you are opposite the prevailing sentiment ahead of 'inflection points' - in asset classes, specific stocks, or the broad market."

In the case of the Deutsche Bank study, the inflection point comes when the market realizes the price distortion.

"By investing before that reversal in sentiment, you get into an investment before everyone else - meaning at a low price and, most likely, at a low risk level," Patalon explained. "Then, when the inflection point comes, all those other investors suddenly 'agree' with you and pour in their own capital. That liquidity does the heavy lifting, driving up the value/price of the investment you already own - making you a killing."

In his book, Patalon and co-author Anthony Gallea outlined a series of rules anyone can use to profit from this basic concept.

While the book is full of practical tips, Patalon said he has one favorite strategy anybody can use.

This is the single-best buy signal for a beaten-down stock...

Put This Contrarian Strategy to Work for You