Yes, if you jumped in around January and have watched the Bitcoin prices plummet, you probably have the urge to sell all your coins or avoid the crypto market entirely. 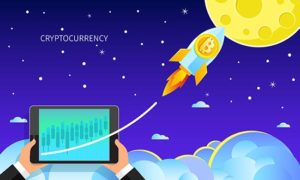 That could be a costly mistake...

We're going to provide all the details on how to access Robinson's explosive report in just a bit.

But first, we wanted to show current Bitcoin holders just how far the industry has come in such a short time.

It suggests this is just the start of crypto wealth creation...

Back in January 2009, Bitcoin came into existence via its mysterious founder (or founders), Satoshi Nakamoto.

Few outside of those working with Nakamoto even knew it existed.

Fast-forward nine years later to 2018, and we're in the early stages of a revolution...

The 1,610 cryptocurrencies on CoinMarketCap.com have a total market cap of $216 billion, making them worth more than Twitter Inc. (NYSE: TWTR) and International Business Machines Corp. (NYSE: IBM) combined.

Facebook Inc. (Nasdaq: FB), the world's largest social media site, with 2.20 billion monthly active users, is "very serious" about launching its own cryptocurrency, according to CNBC.

Financial service platforms like Robinhood and Square Inc. (NYSE: SQ) are racing to let users buy and sell Bitcoin. The Winklevoss twins of Facebook fame are pushing the SEC to approve a Bitcoin ETF, which will provide retail investors an easy way to add Bitcoin to their portfolios.

It's true the crypto coin space is getting crowded, but Bitcoin still has the best name recognition and is one of the easiest to buy.

It's going to be the coin all new crypto investors are likely to own first.

And remember, we haven't even hit a decade of Bitcoin being in existence.

Just imagine what could happen in the next 10 years...