Investors everywhere are celebrating the incredible profits they've banked, but all good things come to an end... 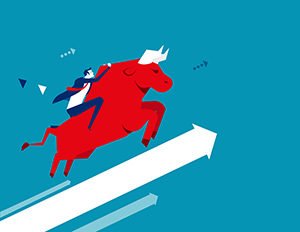 While returns have been phenomenal, the bull market's push into uncharted territory has many investors wondering if the market's best gains are in the rearview mirror.

These investors may be on to something...

Rising volatility, high valuations, and troubling geopolitical developments are all signs the market is primed for a correction - or even a bear market.

However, these bearish indicators don't mean you have to lose money in the market - in fact, any market downturn can be a tremendous profit opportunity.

You just have to be prepared...

A Bear Market Is Coming - Here's How to Protect Your Portfolio

The reality is this bull market is in completely uncharted territory.

According to financial services company Ned Davis Research, there have been 37 bull markets since 1900 with an average length of 25 months.

Not only is today's bull market blowing past the 86-month record set in 1956, it's eclipsing the average bull market length by a full seven years.

As a result, Wall Street is largely uncertain about how this bull market will behave as it continues to age.

One increasingly likely outcome is that it triggers the market's next significant correction.

According to a report from Deutsche Bank, a stock market correction occurs, on average, every 357 days - or about once a year.

During this record bull market, there have been a record amount of them - 15 of the 20 largest single-day point declines have occurred over the last 10 years.

On average, that's a correction every 240 days. It's been almost 200 days since the market's last correction.

As a result, you shouldn't be surprised if institutional investors - especially those invested in highly leveraged funds - use this historic milestone as an excuse to take profits and wait for the market to pull back.

And when this happens, you'll be able to make a killing - if your money is in the right place...

Great article but just one little glitch. The difference between the current bull market and the average bull market is 61 months (86-25) which is 5+ years not seven+. This bull market is on track, unless something major happens, to continue for at least another 12 – 18 months since the treasury gap is still positive (ie, has not inverted). In between I agree with you that there may be corrections along the way as the market continues to melt up to new highs.