Apple Inc. (NASDAQ: AAPL) became the first trillion-dollar company on Aug. 2, leaving many investors with the impression that AAPL stock had little room to run higher.

That couldn't be more wrong...

While this is a historic milestone for the company, shares of Apple are continuing to trade for a steep discount compared to the rest of the market. 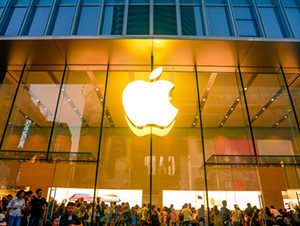 You see, Apple has been quietly streamlining its operations over the past year by cutting costs, finding new suppliers, and tightening its supply chain. This will not only be good news for the AAPL valuation long term, but it's great news for the companies plugging into Apple's pipeline.

Here's why investing in Apple is still hugely profitable, plus a bonus opportunity to play one of its suppliers for even bigger profit potential...

Why Apple Stock Is Still a Bargain

AAPL stock predictions are a dime a dozen, but the fact is that this stock remains a bargain because of its price/earnings ratio.

Apple's P/E ratio is currently 18, which is low when you compare it to other tech giants.

And even though its market cap is about a ninth the size of AAPL's, Netflix Inc. (NASDAQ: NFLX) has a P/E ratio of 155.

That means shares of AAPL are trading at a huge discount compared to the rest of the market, and it means it has even more potential to run higher.

This is one of the reasons Money Morning Defense and Tech Specialist Michael Robinson put a $250 price target on AAPL stock.

And even though the company represents a value right now, its innovation is continually leading it to new heights.

As the company moves quickly to improve its processes, it is also pulling in massive profits with its iPhone products.

Even though smartphone sales dipped slightly in Q2, it made up for the revenue with the iPhone X, which has an even higher profit margin.

In fact, Apple has increased revenue 37% year over year. In 2017, 40% of the company's revenue came from the Apple Store. The combination of music and apps for sale will continue to be a profit source for AAPL.

There are now more than 1 billion Apple devices being used daily, which gives this company considerable momentum for the future.

That's why AAPL is within striking distance of Michael's Apple stock forecast of $250 per share. From today's $216.15 share price, that represents a 16% gain.

This is an excellent return if you invest in AAPL, but it's possible to leverage this company's activities and boost your profits by as much as eight times this amount.

This is possible through a backdoor profit play based on the company's recent activities. Apple has aggressively pursued streamlining its production capabilities over the past year, and our pick will directly benefit from these efforts.

This supplier is one of the companies helping Apple achieve the massive growth and profits it's projecting.