Gold prices are finally sending us some good signs, and I think the gold rally we're witnessing could turn up the gas even sooner.

After hitting a low near $1,170 in mid-August, gold prices bounced back up, touching as high as $1,202 intraday as the U.S. dollar retreated after U.S. President Donald Trump criticized the Federal Reserve's rate hike plans. 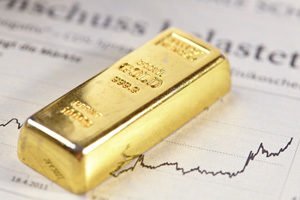 Plus, worries about Trump's connections to Cohen and Manafort's legal troubles drove investors into gold.

That, along with the U.S.-China tariffs that just kicked in, boosted the greenback, and the price of gold retreated, leading to doubt that gold was finally done with its multi-month correction.

In my view, the dollar has a lot further to fall.

How the Gold Price Rally Kicked Into Gear

After hitting a fleeting momentary low of $1,165 at midnight on Aug. 16, gold powered higher through Wednesday morning (Aug. 22).

That's when the yellow metal briefly touched $1,202, as the dollar was in full retreat and the U.S. Dollar Index (DXY) traded just below the 95-point level. The dollar index was pressured as news of legal troubles for both Michael Cohen and Paul Manafort (and Trump's links to them) were weighed by traders.

As a result, gold simultaneously benefited from safe-haven buying as impeachment calls grew louder. The DXY later consolidated around 95.10 while gold prices pulled back to $1,195.

Once the Fed minutes were released on Wednesday, the DXY mounted a small, renewed rally.

Here's how the DXY action looked over the past week… 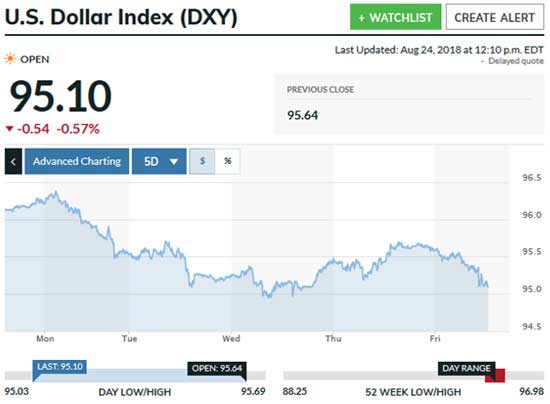 Although Powell reiterated steady rate hikes were the best path forward, he downplayed the chances of economic overheating.

And this even though Powell said he was prepared to do "whatever it takes" if inflation looks like it's getting out of control.  At midday, gold was up nearly $23, trading at $1,207.

We're still in the earliest stages of the latest gold price rally, but I'm optimistic about where gold is heading next.

In fact, what I'm seeing from technical indicators has me even more bullish.

Here's what's behind my latest gold price forecast for September 2018…

Where Gold Prices Are Heading in September

9798 Reads
These 3 High-Yield REITs Pay 8%, 10%, and 12% Dividends
REITs produce gobs of cash from rent and other fees generated from properties including office buildings, storage units, multifamily units, and more.