After an initial bounce from its recent lows, the price of silver has been performing well this week.

Although silver prices did initially plateau and then retreat again last week, the metal formed a higher low, which bodes well for near-term action.

Last week, I told you that silver's bounce had been timid but conditions were ripe for a strong rally.

Since then, silver's renewed climb has brought the metal to a new intra-day high that has so far bested its levels of the last two weeks. The price of silver today is trading at $14.83 in morning trading. 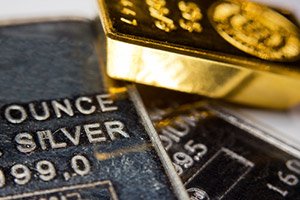 Now that the Jackson Hole central bankers' meeting is behind us, markets can digest its effects.  And despite U.S. Federal Reserve Chair Jerome Powell reiterating his plans for steady rate increases, the dollar has waned since late last week.

Some of that is likely thanks to central bankers' concerns over rising trade wars.

Here's a closer look at how silver prices (and the dollar) are trending this week...

Here's How the Price of Silver Is Moving This Week

Silver's second bottom of the last two weeks was a higher low, and the metal has since bounced back in a healthy way.

The DXY softened into Wednesday before the FOMC meeting minutes were released. The dollar then climbed into Thursday thanks to President Trump's political woes due to his connections to Cohen and Manafort. The possible new hawkishness that came from the Jackson Hole meeting was also bullish for silver prices.

Breaking: An uninhabitable area of the Chihuahuan Desert has been hiding a HUGE $1.4 trillion secret.

But by late Thursday, the dollar would peak at 95.65 and then retreat to just above 95 by late Friday.

Here's the DXY's action of the last trading week: 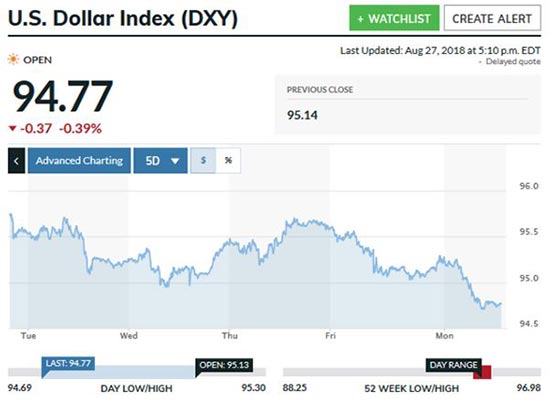 Monday's news of a deal between Mexico and the United States on NAFTA precipitated broader weakness for the dollar as trade tensions softened.

That helped contribute to an even softer DXY, which touched 94.7 just after midday before recovering slightly by end of trading.

Silver would weaken on dollar strength by Wednesday's close thanks to a confirmation from Fed minutes that two more rate hikes are likely this year.

That allowed the dollar a small bounce before finally resuming its downtrend started the previous week, and silver rallied on that weakness to reach $14.86 by Monday's close.

Here's What's Next for the Price of Silver in 2018