By the start of last week, gold prices looked like they were going to pull off a 180-degree reversal. 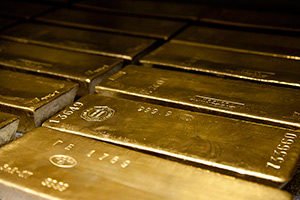 The U.S. Dollar Index (DXY) rally to 97 finally petered out.

MarketWatch highlighted the fact that despite ending higher last Friday, the price of gold closed down for the month of August. That meant five consecutive months of lower prices, something gold prices haven't done in over five years.

But with the dollar's momentum reversing and gold entering its strongest season, this could signal the start of the next gold rally we've been waiting for all summer...

Gold started out last week on a strong note, blasting through the crucial $1,200 level and beyond.

But that Monday (Aug. 27) surge, which carried through from the previous Friday (Aug. 24), would end as soon as early Tuesday (Aug. 28) morning. Until then, the dollar had been selling off as the preliminary U.S.-Mexico trade deal had been announced, relieving some investor anxiety.

By then, the DXY had become a little oversold, and from a low of 94.50, the dollar began a new rally.

Check Out This "Mother Lode" of Fortune: This land is worth trillions - that's trillion with a "T." And this opportunity is right there for the taking if you get in early. Learn more...

After attempting to push toward 95 on Wednesday and Thursday, the DXY finally managed to reach 95.2 by midday Friday.

Here's a look at the DXY over the last week... 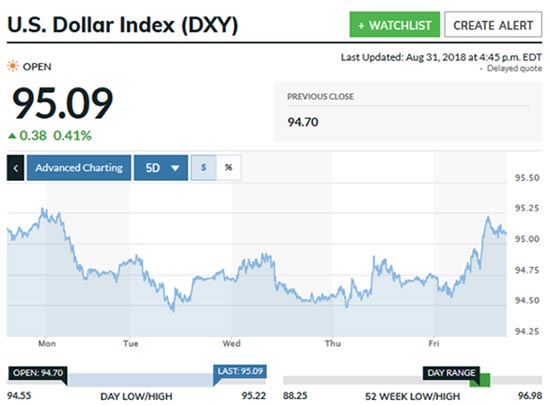 Before that surge, the DXY dropped to 94.60, allowing gold to rise to $1,208 in the early hours of Friday morning. As the dollar rose to its 95.2 peak, it weighed on gold, which dialed back through the morning all the way down to $1,198. But the dollar gave up a little to end Friday around 95.10.

That was just enough to allow gold to regain the all-important psychological threshold of $1,200 to end the week.

What happens to gold prices next depends largely on whether the dollar's rally has ended or if still has legs.

Next, I'll turn to the technical indicators to forecast gold prices as we head into the fall...

My Latest Gold Price Forecast for the Fall