Tesla Inc. (Nasdaq: TSLA) showed the world an electric car could be both luxurious and powerful. Investors immediately understood its ability to transform the new car market. 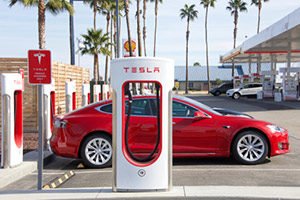 So far, investors have been willing to pump money into a company that isn't making a profit in hopes it can take over the car industry in the future. Tesla lost $785 million dollars in the first quarter of 2018 alone, even as the company's revenue has never been higher.

And investing in Tesla stock could make sense if it does squeeze the major automakers out of market share. Right now, Tesla only accounts for 1.4% of the U.S. car market, while General Motors Co. (NYSE: GM) controls 17.6%.

Tesla's revenue would skyrocket if it could capture even a fraction of GM's market share.

This scenario is perfectly plausible, as rising fuel costs and pollution concerns will eventually phase out combustion engines.

But Tesla investors could be backing the wrong horse.

In fact, one automaker is already dominating the research behind electric cars.

They've also been one of the most innovative companies in the field, even before Tesla arrived on the scene.

And unlike Tesla, this company is already raking in billions in profits every quarter...

This Chart Shows You Why Tesla Is Outgunned