Just when it looked like the price of silver was about to turn around, the metal has given up all its recent gains.

On the back of some renewed strength in the dollar, silver has caved and dropped back under even its previous low in mid-August. The price of silver today (Wednesday) is trading near $14.26.

Now this can be seen two ways.

The bears will say that a new low suggests the correction is not over and silver has much lower to go. The bulls will say selling has likely been exhausted, and sentiment could scarcely get worse. 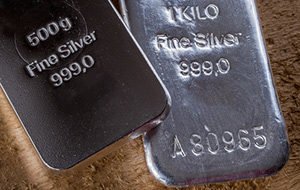 Either may be right. We could still see lower silver prices, with a possible bottom near the December 2015 lows of $13.70 within range.

But odds are a bottom is nigh, and silver could start a new big move upward. Here are the latest indicators for silver prices, with a bullish setup that has not happened in about 35 years...

Here Are the Indicators Moving the Price of Silver Now

The run-up in silver in the early part of last week was an encouraging sign that, unfortunately for bulls, would be short lived.

Silver's peak at $14.97 on Tuesday, Aug. 28, was the highest level the metal had seen since mid-August, when silver was trading firmly below $15.

But the dollar would prove again to be silver's nemesis.

The DXY was about to embark on another wave up as the week progressed. It bottomed on Wednesday at 94.60, as investors were increasingly relieved that trade tensions were subsiding.

Here's a look at the DXY for the last five trading days. 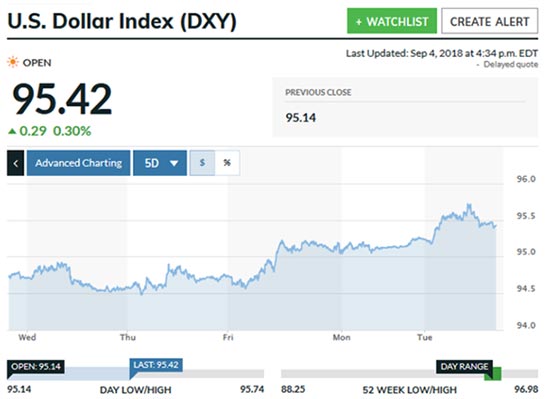 Tuesday's action shows a midmorning peak in the DXY at 95.70, which was right around silver's recent low.

As you can see, silver traded all the way down to test $13.99 before trending higher on Tuesday, in concert with the peaking dollar index.

But silver then rose as the day wore on and traders took profits on the dollar and stepped in to buy silver.

Now here's where I see silver prices heading from here...

Here's Where Silver Prices Are Headed Next

While we've seen the dollar enjoy a bump to 95.7 intraday yesterday, it will be interesting to see what transpires next. 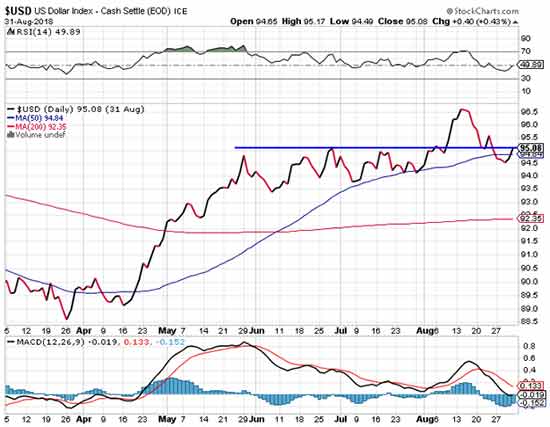 I think the dollar is likely to fizzle at this point and that we'll see the 95 level act as overhead resistance.

Still, we could see another bout of strength before the dollar finally resumes a trend lower. And if that's strong enough, it could well push silver lower to test the December 2015 low at $13.70. 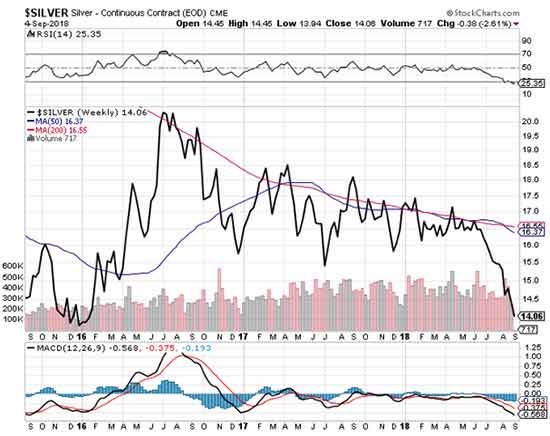 Once again, it's impossible to know, but if the current low in silver can hold, then the metal just may manage to put in a higher low. Sentiment certainly appears to be on the side of this scenario.

And one interesting indicator suggests this just might be the case.

According to the COT report up to Aug. 28, commercial futures traders were net long silver. It was admittedly not by much, but still possibly very significant.

That's because in nearly 40 years, since at least the 1980s, this hasn't happened. Commercials are normally net short in order to hedge their production. But current silver prices may be considered so low versus production costs, they simply cannot last long.

And here's another. The gold-to-silver ratio has just reached over 85, surpassing even the 2008 peak over 80.

Of course, only time will tell, but this is another bullish signal that may point to a historic near-term bottom.

If that proves to be the case, we could be on the cusp of a major new rally in the metal. In the near term, look for $13.70 as a possible downside target and $14.75 as a first upside target.

The stock market crash of 2008 is nothing in comparison to the maelstrom that's brewing now - 2018 will be the year of the greatest economic crisis of the century.

Jobs will suffer, the housing market will spiral downward, and millions of American seniors will face bankruptcy.

But if you know how to prepare, you'll be one of the few lucky ones.