Even though Canada voted to fully legalize cannabis this year, the size of the Canadian marijuana market pales in comparison to its neighbor to the south.

It's no lark. Even today, the United States cannabis market is worth about $8.5 billion, which is already bigger than the Canadian market will be in 2022. In fact, Arcview Market Research and BDS Analytics project that cannabis spending in the United States will reach $23.4 billion by 2022, a 275% increase in just five years. 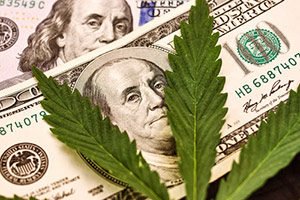 Cannabis is still a unique industry and that means there really are no other precedents against which to measure it. We cannot compare it to alcoholic beverages, although there are synergies between the two. And we cannot compare it to tobacco, because cannabis consumption is not limited to smoking.

Another reason cannabis companies (and specifically cannabis IPOs) are different is that they have historically been underfollowed. The legal and regulatory climate inhibits coverage as analysts do not want to cross any lines with their compliance departments or even the law.

And even aside from that, the IPO market has historically been unavailable to cannabis companies at all.

Money Morning Director of Cannabis Investing Research Greg Miller believes that IPOs will change that – and in a big way. A wave of U.S. companies going public on Canadian exchanges will draw new attention to the sector. And it will create explosive growth for investors. Numerous marijuana stocks will soar.

Personal computers were hot decades ago. So was the Internet, but Miller thinks cannabis will be many times hotter. Once mainstream investors – and institutional investors, in particular – latch on to this potential, these IPOs will mint new cannabis millionaires.

Some of the biggest gains we've seen over the past year have come from cannabis stocks. Canopy Growth Corp. (NYSE: CGC) is up over 550%. Tilray Inc. (Nasdaq: TLRY), which went public just six weeks ago, is up 158%.

Miller is watching several U.S.-based companies looking to go public on the Canadian Stock Exchanges (CSE) in the coming months, but they are not all taking the traditional path.

Here are the ones to watch…

Getting Ready for Huge Gains from Cannabis IPOs

The largest of the group will likely be Acreage Holdings, the former High Street Capital Partners LLC. The company made several acquisitions, beefed up management, brought in former House Speaker John Boehner as a spokesperson, and raised $119 million of capital from private investors. Acreage plans to go the traditional IPO route.

Canadian operators Canopy Growth Corp. (NYSE: CGC) and The Green Organic Dutchman Holdings Ltd. (OTC: TGODF) are taking a different route to the public markets for their planned U.S. operations. Both are spinning off pieces of the respective parent companies and offering existing shareholders the right to buy into the U.S.-based offspring.

It's a not-so-subtle declaration that these companies think the U.S. market is undervalued by limiting the initial capital raising to their existing shareholders

But there are many more, including a Colorado-based company with significant CBD (cannabidiol – the non-psychoactive compound in the cannabis plant) and hemp holdings as well as a lofty endorsement from a medical celebrity, that will also go the traditional IPO route.

Two major U.S.-based dispensaries, including one of the first legal operations in the world and another with rights to market the brand of one of cannabis' most famed advocates, are planning on going public via the reverse-takeover route. A reverse takeover is often done by a small company acquiring the stock market rights of another, usually dormant, company. In that way, it gets access to the public markets without having to "go public" itself.

Miller has one warning for budding cannabis investors. Not all IPOs in this sector are equally sound, so you really have to do your homework to separate the fly-by-night operations from the real companies that will make you real money.

Marijuana stocks surged up to rare 12,400% gains in the last election year.

But this veteran analyst has unveiled 16 reasons why cannabis stocks will make investors incredibly rich in the election year of 2018.

Four cannabis stocks could be destined to post the greatest profits in 2018.

Do you have a date for ACREAGE HOLDINGS IPO?

Hi Melvin, for now there's no date for the IPO but we know the IPO should be registered this autumn.

Looking forward to it.

I'm looking for a source of upcoming Cannabis IPO's

Please advise if a calendar is available showing the IPO dates.