Our latest list of best stocks to buy features a slew of tech companies, from young disrupters to established stalwarts. Plus, we feature one company on top of a new trend that could soar as M&A activity heats up. 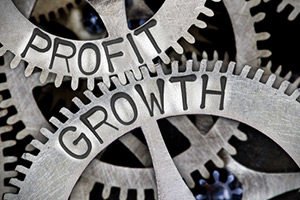 Any real estate purchase is loaded with risk. Natural disasters, property taxes, tenant delinquency, and infrastructure issues are just a few of the problems that can drastically affect a property's value. The inability to get reliable information on a property can stifle investment.

But one Big Data company is helping to solve that problem.

That would be CoreLogic Inc. (NYSE: CLGX), which maintains a database of more than 4.5 billion property and financial records. These cover residential and commercial spaces but also specialized properties for projects like telecommunications wiring and pipelines.

This has made CoreLogic the go-to source for financial firms looking to invest in rental properties. And there are a lot of them; financier-owned rental properties in the United States jumped 60% in 2017.

Now they can access CoreLogic's data in order to weigh risks related to credit, taxes, or flooding, or to get information on just about anything else they can think of. And it's all available instantly on the digital cloud.

We've actually liked CoreLogic for a while now. It's up 82% since Money Morning Defense and Tech Specialist Michael Robinson recommended it in August 2014, compared to just 48% for the S&P 500 in that time.

Now Michael is doubling down, saying the stock's share price will likely double within the next four years.

That's borne out by the company's earnings picture. According to FactSet, earnings per share is projected to rise nearly 50% between 2017 and 2020.

CoreLogic's price-to-book ratio of 4.0 suggests a 67% rise is in order. And its price/earnings to growth ratio for the last 12 months – for which 1.0 would represent a fairly valued stock – comes in at just 0.2349. That suggests a staggering 326% rise.

The bottom line, Michael writes, is that CoreLogic is "a great long-term Big Data way to play multiple aspects of the nation's real estate sector."

Grab it now, and it won't be long before you've doubled your investment.

Best Stocks to Buy, No. 4: Cannabis Legalization Opens Up an Overlooked Opportunity for First Movers

Anyone who reads Money Morning regularly knows that legal cannabis is one of the fastest-growing industries in the world. The North American market is set to double over the next three years. And the global market, according to Arcview Market Research, will be worth close to $60 billion within the next decade.

Perhaps even more striking is the level of use among adults in the age of legalization.

According to research by BDS Analytics, a clear majority of adults in North American jurisdictions where cannabis is legal are either consumers (have used within the last six months) or accepters (would consider using in the future). 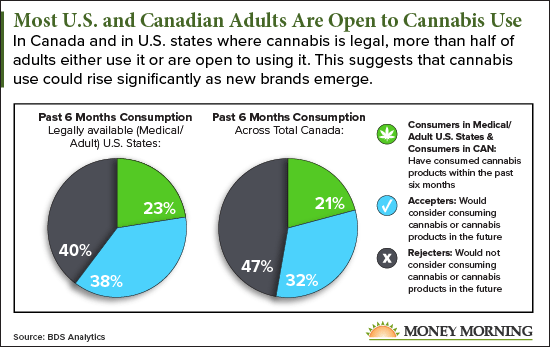 Cannabis might be legal in some places, but it's still illegal to drive under its influence. That's because – as a 2012 report from the EU made clear – alcohol, drugs, and prescription medications are the biggest threats to safety on the road.

Billions Are Now In Play: Millions of Americans could collect "Federal Rent Checks" - to learn how to claim your portion of an $11.1 billion money pool using this backdoor investment, click here now...

But if the drug itself is legal, then simple evidence of use or possession is not enough to be a violation. States need a reliable testing apparatus to determine if a driver under the influence is criminally impaired.

That's where Cannabix Technologies Inc. (OTHER OTC: BLOZF) comes in. This Vancouver-based company has partnered with Yost Research Group and the University of Florida to develop a breathalyzer for cannabis that law enforcement officers can use to quickly gauge the level of THC in a driver's system.

Even then there's a problem: THC can stay in a person's system for days or even weeks after the psychoactive effects wear off. That's what makes random drug screening viable at workplaces and other institutions.

So Cannabix's device will specifically target THC in concentrations that would be present if someone had used marijuana within the last two to three hours – a reasonable window of time for the effects to still be present.

This is a speculative play, meaning you probably don't want to invest more than 2% of your portfolio in it. But thanks to its patented technology, Cannabix is likely to be the only game in town for a while once its product hits the market. Every new state that legalizes is going to mean a round of new contracts.

Plus, the fluctuations that come with a low-cap speculative play could work out in your favor if you buy low and sell high, according to Money Morning Chief Investment Strategist Keith Fitz-Gerald.

"This is one of those very few stocks with enough volatility that you can repeatedly enter and exit the position," Keith says, "creating double- and triple-digit returns each time."

Best Stocks to Buy, No. 3: Here's the Company That Should Benefit from the Next Big Cannabis Catalyst