With gold prices still trading tightly in the $1,200 price range, the yellow metal can't seem to gather any momentum. But that's about to change...

Even with the relative weakness exhibited by the U.S. dollar in the last week or so, the price of gold has been unable to break through its resistance level.

And gold traders continue to wait for a catalyst to drive the gold price direction. 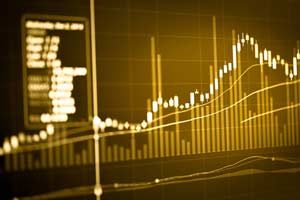 Barring unforeseen events, it seems that gold price catalyst is most likely to be the next Fed rate hike, widely expected by late September.

But once that hike becomes a reality, those reactions could well reverse, as we've often seen before.

And then we could have gold prices kick into a long overdue rally.

Today I'm going to show you what's been keeping gold trading within its tight range - and what the next Fed interest rate hike will mean for gold prices in 2018...

The price of gold moved mostly sideways through to the middle of last week, bouncing in a tight range above and below the $1,195 price level.

Meanwhile, the U.S. Dollar Index (DXY) did essentially the same, for its part oscillating around the 95.15 level as traders awaited some sort of trigger.

That finally came on Thursday (Sept. 13) as China welcomed an invitation from the United States to talk trade in an effort to stave off Trump's threatened $200 billion tariffs on Chinese goods.

You can see how the trade war news rippled through the DXY in last week's chart... 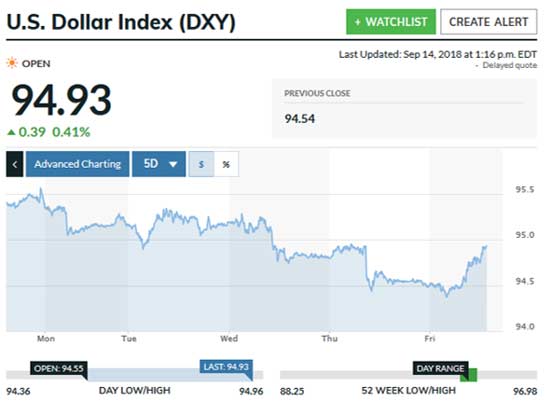 Plus, a report showing that U.S. consumer prices had increased by 0.2% in August, a pace slower than expected, eased some inflation fears.

The lackluster inflation news sent the DXY down and gold up. The DXY hit 94.5 on the news while gold popped to $1,212 momentarily.

But that was fleeting as the gold price then reversed and closed at $1,204, but still solidly above $1,200.

Then on Friday (Sept. 14), a small bump in industrial production for August, along with news Trump told aides to proceed with another $200 billion in tariffs on Chinese goods, levitated the DXY to 94.9 by early afternoon.

Despite the trade war news, gold prices kept trading within a small range.

That's going to change when the Fed raises interest rates for the last time in 2018.

My latest gold price forecast showed that could be just the catalyst gold needs for a bull market run to close out the year...

My Latest Gold Price Prediction for 2018