The U.S. military is planning to pour billions of dollars into the purchase of more ships and planes over the next few years.

Concerned about the likelihood of a conventional armed conflict with a large power like China or Russia (or perhaps to deter one), the Department of Defense has ramped up spending over the past couple of years.

As you can see, military spending had been in a slow decline, but it's now set to reach record highs over the next decade… 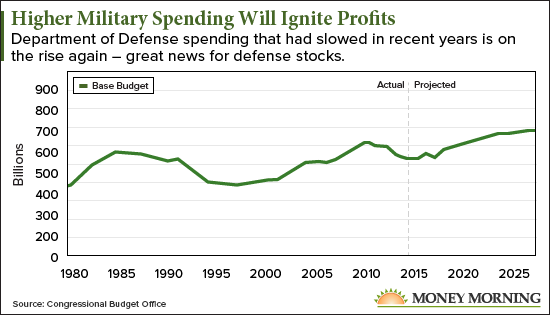 Why Military Spending Is Rising

A big chunk of the additional spending is going toward the growth of the Navy and Air Force.

The Air Force is planning to grow by 24%, which translates to hundreds of new aircraft filling out 74 new squadrons.

The Navy has set a goal of increasing its fleet from about 285 now to 355 ships by 2032. Much of that will require new shipbuilding, although the Navy is also considering programs that will extend the service life of its ships.

No matter how you slice it, there will be a lot of new work available for defense contractors.

And while future authorizations of higher defense spending aren't guaranteed, it's as close to a sure thing as you'll find in this world.

You'll notice that defense authorization bills are rarely controversial and usually pass with little fanfare. In fact, the most recent bill passed in August by a vote of 87-10 in the Senate and 359-54 in the House.

Because it is spread generously around to the 50 states, legislators are loathe to vote against defense spending – it keeps a lot of folks back home employed.

So the only question is how investors can best capitalize on this opportunity.

For sure, the major defense stocks will all benefit. Names like Lockheed Martin Corp. (NYSE: LMT), Northrop Grumman Corp. (NYSE: NOC), Raytheon Co. (NYSE: RTN), and Boeing Co. (NYSE: BA) are all solid plays on the growth in defense spending.

There's even an ETF (exchange-traded fund), the iShares U.S. Aerospace & Defense ETF (BATS: ITA), for those who prefer broad exposure to the sector.

But we've found three companies that, according to their high Money Morning Stock VQScores™, are the best defense stocks to buy now…