The casino and racetrack operator's stock surged after the U.S. Supreme Court struck down a federal ban on sports gambling, and the firm announced plans to sell to a Rhode Island casino operator. 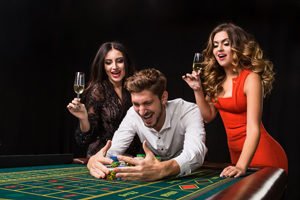 Just last week, Dover Downs opened its sports gambling window to accept its first NASCAR bet, one of many it should expect in the future.

And with greater gambling proceeds comes a fatter bottom line.

With the fortune we found with Dover Downs, I've been asked by readers to take a look at other gambling stocks and find another triple-digit winner.

While everyone is talking about MGM Resorts International (NYSE: MGM) or Caesars Entertainment Corporation (NASDAQ: CZR), they're missing the opportunity of a lifetime to scoop up small, cheap casino operators.

That's where the biggest profits are located.

I've scoured the corporate statements of the entire industry, and I'm willing to bet you've never heard of this potential triple-bagger...

The Gambling Stock Everyone Will Wish They Owned

In September, I said that if you're going to go BIG on international gaming, you should take a look at Las Vegas Sands Corp. (NYSE: LVS).

I expect this large-cap casino giant will be a major player in the Japanese gambling markets in the wake of legalization in the country. The company also remains a leader in the Las Vegas and Macau, China markets.

But Sands isn't my top pick.

To get even bigger upside, you'll need to harness two trends: the ongoing consolidation wave in the gaming sector and expected growth in the international markets.