Canada will fully legalize marijuana for all uses tomorrow (Oct. 17), and it's slated to be one of the biggest catalysts we've seen in the marijuana industry yet.

We want to show you exactly how huge this catalyst will be by zooming in on Canada's medical cannabis market.

But the new law will ignite medical cannabis profits, too.

When the Cannabis Act goes into effect on Oct. 17, new regulations will govern Canada's existing medical marijuana policy, making it even easier for medical patients to access cannabis products.

Over 330,000 Canadians already have access to medical cannabis, but these users will now be able to buy cannabis from any licensed retail outlet, including online outlets. Plus, medical cannabis patients can possess 150 grams of cannabis, while non-medical users can only possess 30 grams.

That means Canada's medical marijuana system won't be replaced by recreational use – it will just get bigger.

In fact, Statista forecasts the medical marijuana market will be nearly 300% larger in just four years. 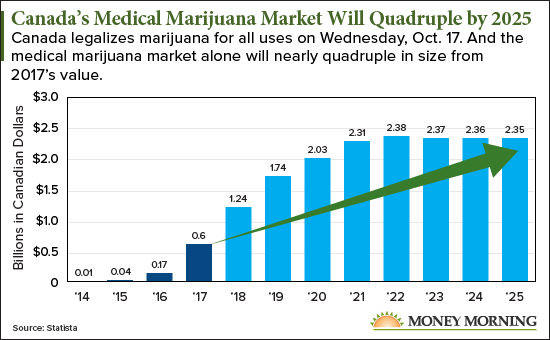 Again, this is just for medical cannabis in Canada.

This is truly a once-in-a-lifetime opportunity for investors to get in the market ahead of a major new catalyst.

But time is quickly running out.

That's why we want to make sure you see our urgent briefing on the Cannabis Act, which will deliver the chance to pocket as much as $2 million by this time next year…