It's been a shocking month for the Dow Jones Industrial Average.

The stark decline over the last three weeks has investors wondering what's behind the Dow Jones' decline in October. 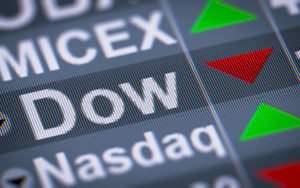 Plus, we'll also show you how you can protect your investments if things get worse...

China Is Not Backing Down from Trump's Trade War

Much of this month's stock market losses are the result of aggressive trade rhetoric from China.

The trade war between the United States and China is starting to hurt corporate earnings and has investors pessimistic about stocks.

Over the last three weeks, China has instituted a slew of new trade policies designed to counter the White's House's hostile trade stance.

On Oct. 7, Chinese finance officials cut the nation's reserve requirement ratio. That's the minimum amount of cash that Chinese banks must keep on hand in case of a financial crisis.

American economists believe that the cut has injected $109 billion directly into China's economy.

Another side effect of the move is that it causes the Chinese yuan to lose value. And this makes Chinese companies more competitive against American competition.

Just this week, the Chinese government announced a set of additional reforms designed to prevent the Chinese economy from weakening under American trade pressures.

According to an announcement from the China Securities Regulatory Commission (CSRC), China will loosen regulations restraining stock buybacks, foreign investment, and corporate mergers.

China's aggressive reproaches toward American trade policies are a clear sign to investors that Trump's trade war will not blow over anytime soon.

As a result, markets are likely to feel the burn of trade restrictions and tariffs as the conflict wears on.

But that's not the only factor sending markets south...

Rome and Brussels Are Butting Heads over Italian Debt

On Tuesday (Oct. 23), the European Union rejected the Italian government's 2019 budget proposal, setting up a showdown between Italy's populist government and European Union officials in Brussels.

This would add to a total government debt already equal to 131% of the nation's GDP - a figure that's twice the amount of the Eurozone's acceptable debt-to-GDP ratio.

Despite the risks, Italian government officials have stated they have no intention of backing down. Following Brussel's rebuke, Italian Deputy Prime Minister Luigi Di Maio stated that the nation is "on the right path, and therefore [it] won't stop."

The Italian government has three weeks to present a new proposal in line with European guidelines to Brussels.

If the EU and Italy are unable to come to an agreement, investors fear that the EU's third largest economy could collapse under the weight of its debt and drag the world's largest trade bloc into a recession.

A recession in Europe could easily spread to the United States.

Rising Interest Rates Are Putting Pressure on the Dow Jones

You see, companies that need to borrow in order to fund their growth are required to use more of their existing capital to fund that growth when interest rates rise.

As a result, they have less money on hand and tighter margins. This can prevent companies from making the kind of investments that spur economic expansion.

And this, in turn, can hurt investor returns. With stocks near all-time highs, investors are more likely to pull their money out, fueling the sort of sell-off that could drive stocks into correction territory.

In spite of these indicators, it is still too early in the market's decline to know if this week's significant losses are the first signs of a stock market crash.

But that doesn't mean you shouldn't be prepared.

In fact, now is the perfect time to develop a plan to address a stock market crash...