Since Donald Trump's 2016 victory on Nov. 8, the S&P 500 has soared 33% higher. Now investors are wondering if they should expect a repeat performance if Republicans hold Congress.

Even if Democrats only take control of the House of Representatives, investors fear a divided Congress will be a drag on the markets too. As Barron's put it, "gridlock just isn't good" when it comes to stocks.

Could You Soon Be a Victim of ReHIREment? This terrifying new normal affecting 9 million Americans was completely out of their control. Read more…

Other investors might hope to have different parties controlling Congress and the presidency. After all, that was the scenario during the booming economy of the 1990s and during the recent recovery from the Great Recession.

But the reality is, it might not matter at all which party wins control of Congress in November…

What Midterm Elections Mean for the Stock Market

While Marketwatch predicts "trouble for investors" this election season and both parties are warning investors about what the other will do, the data doesn't lie. 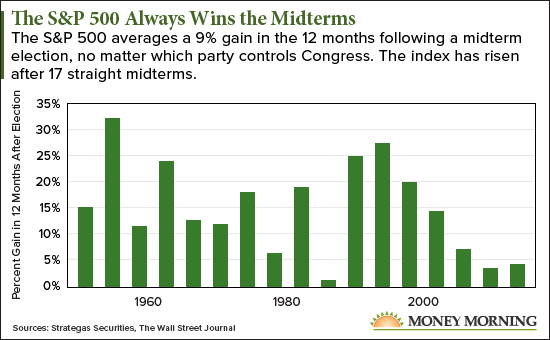 That's 17 midterm elections in a row, dating back to the 1940s, where stocks have gone up in the 12 months after the election.

While this phenomenon isn't guaranteed to happen for an 18th time, we think the history is important to keep in mind. After all, investors weigh the same exact arguments before every midterm election, and the dire predictions have yet to come true.

You see, the market follows a predictable pattern during election cycles. Investors uncertain about the election act defensively, keeping assets in cash or selling some of their most expensive holdings.

Barron's reminds us the S&P 500 has gained an average of 6% in the year of a midterm election, which is well below the 9.1% average rise in non-election years.

True to form, the S&P 500 is up just 2.2% so far this year as volatility spiked in early October.

The good news is, once the election is over, money typically comes flooding back into the market.

The S&P 500 averages a 6.4% return in the fourth quarter of midterm election years according to the Bank of America (NYSE: BAC). That helps fuel the positive gains we've seen in the 12 months after a midterm.

If you've been sitting on the sideline or you've been concerned about what will happen to Congress in November, it's a good time to buy back into the market before it gets a post-election boost.

Today, Money Morning would like to introduce you to the only undefeated strategist in the business (that we know of).

All 32 of his closed positions are winners.

And as of Aug. 8, 85 of his 87 open positions are up – the vast majority by double and triple digits. Look for yourself…