Finding a marijuana penny stock with the potential for gains of 1,000% is nothing short of an investing "holy grail."

Returns like that - 10 times your initial investment - are rare. But it does happen, and in some sectors, it's more likely than in others. 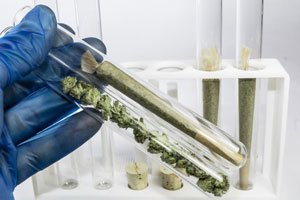 One of those sectors is biotech. And the marijuana penny stock I’m talking about happens to be a biotech with a lot of potential.

Don't be surprised if you haven't heard of it. Unlike many other pot stocks, it has remained under the radar despite the intense interest in marijuana-related investments these days.

Maybe that's because it's so tiny right now. It's a micro-cap stock with a market cap of just $48 million. It has no products, no revenue, and no earnings.

And yet, I believe this penny stock has a solid chance to rocket much higher. As I'll explain shortly, it has several advantages that in time will have it punching above its weight.

We've spotted these kinds of opportunities before, and they've delivered some extraordinary profits...

How Picking the Right Biotech Stock Can Pay Off

We have a knack here at Money Morning for picking biotech winners.

In March 2014, Money Morning Defense and Tech Specialist Michael A. Robinson recommended a name that pot stock investors should recognize - GW Pharmaceuticals Plc. (NASDAQ: GWPH) - even though it had already soared 65%.

When that article was published in Money Morning, GW Pharmaceuticals closed at $60.26 a share. Today GWPH is trading at about $143, for a gain of 137%. But just a month ago, the stock reached a high of $179.65 - an increase of nearly 200% from where Robinson recommended it.

In April 2012, he recommended Pharmacyclics Inc. to his readers, suggesting that the company was a prime takeover candidate. When pharma giant AbbVie Inc. (NYSE: ABBV) bought Pharmacyclics in March 2015 for $21 billion, subscribers who heeded his advice pocketed a stunning 818% gain.

Don't Miss: Bill Patalon's secret stock-picking method has uncovered 217 double- and triple-digit peak-gain winners since 2011. Find out how it's done...

Earlier this month Patalon interviewed the CEO of the company and was very impressed with what he heard.

Not Your Garden-Variety Marijuana Penny Stock

The biotech stock I’m talking about is Nemus Biosciences Inc. (OTCMKTS: NMUS). And the CEO is Dr. Brian Murphy, whose credentials are first-rate – a key component for a biotech with lofty goals.

He has more than 15 years of experience in drug development and evaluation, having served as Chief Medical Officer of Eiger Biosciences, and prior to that, Valeant Pharmaceuticals International. Dr. Murphy also served as Medical Director, then Vice President of Marketing and Commercial Strategy of Hepatology for InterMune Inc. And before that he was Medical Director of North America for Antivirals/Interferons at Hoffmann-LaRoche (OTCMKTS: RHHBY). He has an MPH (Master of Public Health) from the Harvard School of Public Health and an MBA from the Columbia University Graduate School of Business.

As a biotech veteran, Dr. Murphy knows only too well what the widespread legalization of cannabis could mean to the pharmaceutical industry.

"When you're dealing with cannabinoids, I would say that this is really a once in a generation opportunity, both from the researcher perspective and from the investor perspective," Dr. Murphy said in his interview with Patalon.

Dr. Murphy also noted that research in cannabinoid-based drugs figures to take less time than typical drug research where 10 years is often the norm before a compound reaches the market.

"This is a class of drugs that has been studied since the 1960s," Dr. Murphy said. Decades of scientific investigation means that researchers already know a great deal about how cannabinoid compounds react with the human body - information that would otherwise take years to collect.

Dr. Murphy also pointed out that several cannabinoid drugs have previously won regulatory approval (one of which, Cesamet, he worked on while at Valeant), both in the United States and the European Union. This provides a regulatory "road map" for the kind of cannabinoid-based drugs Nemus hopes to bring to market.

In Dr. Murphy, Nemus already has an expert "insider" who knows how to navigate the often treacherous waters of biotech.

The company also has forged a partnership with the University of Mississippi, which operates a world-class cannabis research program. In fact, the university (with Nemus) is the only U.S. entity permitted to grow cannabis for research - quite an advantage.

It gets better. The Nemus licensing agreement with the University of Mississippi covers certain compounds they create together and grants the company "worldwide exclusive access in perpetuity" - giving the company a leg up in regard to patents.

Is Hemp, cbis any good