What happened in gold prices over the least week is going to become more commonplace.

Early Tuesday morning (Oct. 23), as I began my daily routine, I checked in on gold prices just before 8 a.m. 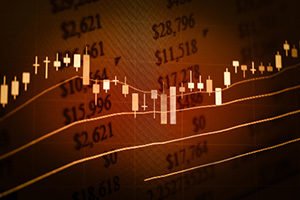 That was the price for an ounce of gold; $15 higher after the metal had ended the previous day at $1,222.

The price of gold hit a three-month peak as stocks slid globally and geopolitics remained high on the list of investors' concerns. The 10-year treasury yield dropped to 3.13%, and the U.S. dollar remained near a two-month high as safety became the order of the day.

Just last week, I said to watch for a break above $1,235 for a possible confirmation that a new gold rally was at hand.

We're almost there now, and I'll show you the latest gold chart pattern to show you exactly why...

Why Last Week Kicked Off a Gold Price Rally

Monday (Oct. 22) was lackluster for gold as equities bounced back strongly and the dollar saw gains.

But Tuesday brought the big move.

After climbing strongly in the early morning hours, gold reached near $1,239 momentarily, just after 8 a.m. Stocks sold off hard, with the Dow dropping almost 500 points, or 2%, as weak earnings and geopolitical tensions weighed on investors' spirits. The EU rejected Italy's proposed budget and asked for a revised draft within three weeks, and Brexit negotiations continued to cause concern.

On Wednesday (Oct. 24), there was more obvious safe-haven buying as the U.S. dollar jumped again. The U.S. Dollar Index (DXY) made a morning run to test 96.5 before turning back to 96.35.

You can see how the DXY slowly grew over the week as stocks slumped... 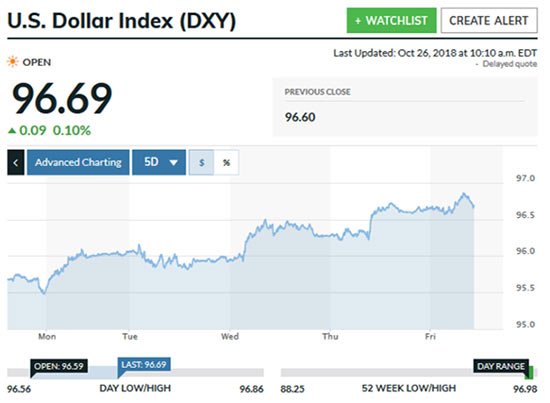 But I believe last week's gold price performance was great news - and a sign a gold rally is in the works.

Here's my gold price target thanks to the coming rally...

Where Gold Prices Will Rise to as the Rally Gains Steam

History repeats itself…gold goes up a little in oct., pulls back in nov and gains strength in Dec leading up to the January rally. January 2019 may be better than usual.