The next recession could hit a lot sooner than many think...

There are plenty of reasons to expect the good times to keep rolling, too.

Since March 2009, the Dow is up more than 250%. Some stocks, like Amazon.com Inc. (NASDAQ: AMZN) have skyrocketed nearly 2,000% in that time. The current bull market is now the longest ever, after shattering the previous record in August. 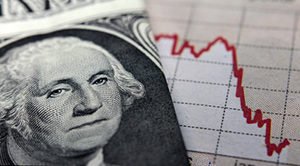 And the economy is as hot as ever.

The unemployment rate is at 3.7%, its lowest mark in more than a decade. Corporate profits have reached record highs in eight consecutive quarters. GDP grew 3.5% in the last quarter, nearly doubling its growth in Q1.

Even White House economic advisor Larry Kudlow has scoffed at the idea of a coming recession. "My personal view, our administration's view, recession is so far in the distance I can't see it."

We certainly don't blame anyone for staying active in this kind of market.

But with the Dow retreating into the red for the year yesterday, investors and market watchers are starting to wonder if another recession is around the corner.

Unfortunately, this chart pinpoints exactly why that might be the case...

This Signal Could Predict the Next Recession

While the numbers we laid out for you above paint an optimistic picture, there are three big warning signs sitting just below the surface.

First, debt is rising in a hurry. Consumer debt could hit $4 trillion by the end of the year, its highest level ever.

CNBC reports individuals are spending 10% of their earnings paying off nonmortgage debt each month. Credit card debt is up 5% over the last year, while the average household with a credit card balance is looking at a bill of $15,482.

Second, the housing market is turning down. Home prices have plunged 7% on the year, new housing starts are down 10%, and nearly a quarter of home sellers have cut their asking price this year.

These are both signs that the economy might be running out of steam. And they mean when the economy does slow, many Americans will be in a perilous situation.

But the biggest warning sign is rising Treasury yields... 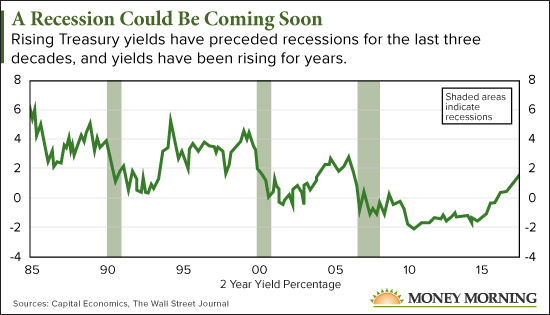 As you can see, rising two-year Treasury yields have preceded the last three recessions going back to 1985. And two-year yields are surging again.

It's only a matter of time before the next recession hits.

It's a signal investors are moving their money into long-term bonds for safety, and it's exactly why rising yields on two-year Treasuries is so worrying.

But investors can't afford for the yield curve to invert before they start taking defensive actions...

This Guy Called the 2008 Crisis: Now He Sees Another Red Flag

I found the information to be very informative