Over Thanksgiving weekend, the United Kingdom lurched one step closer to the "Brexit," a planned departure from the European Union set for early 2019.

Leaders from 27 EU member states announced their approval for Prime Minster Theresa May's withdrawal agreement, a deal that would enable the UK to keep access to the world's largest trade bloc.

However, investors neither cheered in excess nor smashed their trading screens in anger. 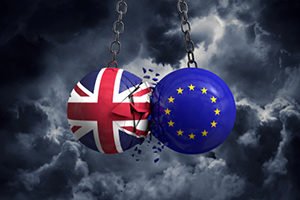 The deal will need the approval from the UK Parliament, a hurdle that many analysts deem almost impossible to surpass.

And while we don't know what the ultimate outcome of Brexit will be, we do know there's going to be uncertainty in the months ahead. That's especially true for investors. One of the world's largest economies leaving the world's largest trading zone will affect companies across the globe.

That could lead to some panic selling.

For 30 years, he's managed money for some of the world's wealthiest individuals. He's a top authority on retirement strategies and wealth-building techniques.

He knows how to make money, even if the world is burning.

And if you want a sneak peek at how Melvin makes more money than he knows what to do with, click here.

But first, because Brexit is going to be one of the biggest stories in 2019, we had to make sure you know all the details about what happened this weekend…

The Anatomy of the Brexit Deal

The vote by British citizens to exit the European Union in 2016 was one of the most explosive political events of the early 21st century.

The vote passed thanks to working-class voters who lived in territories similar to the U.S. Rust Belt, where manufacturing has declined and wages have been stagnant.

The 585-page withdrawal agreement received support from the European Union over the weekend. The three primary issues addressed in the agreement center on the costs of the divorce, border rules with member state Ireland, and the rights of EU citizens living in the UK and vice-versa.

Every divorce costs money. At first, the EU wanted roughly £100 billion (or $128 billion) from London to let the UK leave. That received a few harsh responses from conservatives who wanted to leave the EU years ago. The two parties settled on £39 billion, which will help fund EU obligations through 2020.

But the biggest hang-up hasn't been about money.

Rather, it has been how to address the fact that Northern Ireland (still part of the UK) will share a border with EU member state Ireland.

The solution appears to be that Northern Ireland won't have a hard border with Ireland, and will instead follow EU single-market rules to ensure the flow of goods.

On citizens' rights, all 3 million EU nationals will be able to work, study, and live in the UK without disruption to their lives. The same goes for UK citizens living in EU nations.

The key point is that this includes anyone wishing to move between these regions through 2022, and extensions could follow.

But even with reaching an agreement with the EU over the weekend, uncertainty still surrounds the Brexit deal…

The Possible Outcomes from Brexit