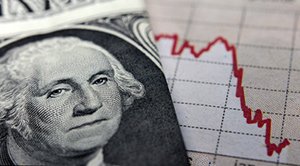 It may sound like hyperbole, but the looming global debt crisis cannot be taken lightly. After years of insanely low interest rates around the world, companies and governments issued debt like it was going out of style. And it just may.

In the last 15 years, worldwide debt has more than doubled, up by nearly $150 trillion. And the Institute of International Finance warned this past July that global debt rose the most in two years, by $8 trillion in the first quarter of this year, reaching an astounding $247 trillion.

That number represents a staggering 318% of global GDP.

Let that sink in.

What would happen if your family borrowings ballooned to more than triple your paycheck in a given year? Your banker would soon be knocking on your door.

And like an individual drowning in that much debt, the world is unlikely to repay all of that cash.

Guess who gets left holding the bag? You do! And it won't be just a little loss.

Money Morning Resource Specialist Peter Krauth thinks it will be an absolute bloodbath for bond holders.

However, Krauth has found a way from to not only survive this "global debt bomb," but to bank massive profits from it as well…

The Global Debt Problem Is Only Getting Worse

In the United States, the country's debt has grown so large that people cannot wrap their heads around it. As it stands this week, the country is on the hook for a staggering $21.79 trillion – with a "t." And even if nothing else happens in the economy, it will grow $310 billion per year just on the interest owed alone.

But things do happen in the economy, and in fiscal 2018, the budget deficit of $779 billion added that much to the total bill. If interest rates keep inching higher, the amount owed on the debt will get larger and larger until it crowds out other necessary spending.

Unfortunately, the U.S. is not alone with massive debt. Since the 2008 financial crisis, China has printed more money than the United States. And much of the borrowing is done in U.S. dollars, through dollar-denominated bonds.

That makes it harder for the debt to be repaid when the Chinese yuan weakens versus the greenback.

The International Monetary Fund (IMF) recently released its latest World Economic Outlook, along with some stark warnings. Exploding public debt resulting from mega bailouts and printing trillions to stimulate economies have limited the policy tools central banks have to deal with future crises.

In other words, central banks are already handcuffed with what they can do to combat future economic problems. They will be unable to handle the global debt bomb when it finally arrives.

For example, the rate on the benchmark 10-year Treasury rallied from 2.06% in September of last year to its current 3.06%. That does not look like much, but it is a 50% increase in just 14 months.

Don't forget, as interest rates rise, the dollar value of bonds and notes goes down. In fact, in just the three weeks from late September to mid-October, $1 trillion in bond value was wiped out, according to the Bloomberg Barclays Multiverse Index.

That's why we're bringing you the following investment to own when interest rates climb. It's an excellent way to profit from this global debt bomb, while others start panicking…

Here's How You Can Profit from Higher Interest Rates