The meeting created a short-term solution to address the ongoing trade dispute between China and the United States. While Wall Street is still weighing the results of the talks, I'm predicting they could kick off a "Santa Claus rally," where stocks surge through the end of the year. 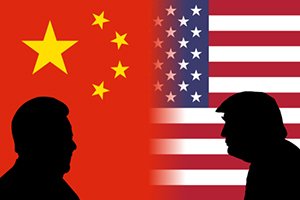 You see, while a formal deal wasn't reached, the worst-case scenario was avoided while progress on other issues was made.

In addition to announcing that the United States will not hike tariffs from 10% to 25% on Jan. 1, President Trump said China has committed to buying more U.S. automobiles.

Traders and investors cheered the pact on Monday, with the Dow adding more than 200 points during the trading session.

Now, it's important to note that the countries' decisions not to raise tariffs are only temporary.

In fact, President Trump described himself as a "Tariff Man" earlier today, and the Dow has plummeted nearly 700 points on the day.

But any short-term resolution is better than escalation.

The United States and China Are Close to a Trade Deal

During the weekend's G-20 meeting, President Trump and his Chinese counterpart agreed to delay tariff hikes while the two nations explore a resolution to the ongoing trade battle for another 90 days.

In addition, China said it would slash tariffs on U.S. vehicles and buy more agricultural, industrial, and electronic goods from American producers.

That's the sort of good-faith measure that has me optimistic a deal is in the offing.

The trade announcement comes shortly after Federal Reserve Chair Jerome Powell signaled that the central bank would be less aggressive on interest rate increases in 2019.

Powell recognized that the U.S. economy could stagnate if the central bank drives borrowing costs higher. The combination of trade uncertainty and expected rate hikes has dogged the broader markets since October.

That means interest rate anxiety will ease just as trade talks improve, which is the perfect recipe for this year's December rally.

While many Wall Street talking heads don't expect China and the United States to make significant progress on a trade deal over the 90-day negotiating window, it's important to listen to the people who are actually involved in the process.

Kudlow also said that he expects solutions to key issues like intellectual property and technology transfers.

Coupled with China's voluntary agreements to buy more American goods, this is a very encouraging sign, despite Wall Street's pessimism.

It also means the stock market could surge if a formal agreement is announced before the end of the year.

How to Trade Right Now