After a week that saw the price of silver struggle to notch any gains, its most recent trading day made up for its latest challenge.

The Buenos Aires G-20 meetings provided for the spark that silver prices needed to rally.

Washington and Beijing announced a "90-day truce" in their trade war, whereby both sides have promised not to escalate tariffs any further as they work diligently to resolve their disputes. 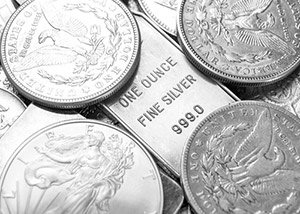 That clearly took buying pressure away from the dollar, allowing broad-based gains for commodities, with silver being no exception.

Silver prices will now look forward to the Fed's expected December rate hike, which could provide another catalyst for the metal to rally higher.

Before we look at how the FOMC meeting will impact the price of silver, here's how the metal is moving now...

A Closer Look at the Movement in the Price of Silver

The silver price initially popped on Tuesday, Nov. 27, to touch the $14.40 level before selling off to bottom at $14.06 near 1 p.m. That damage came as the U.S. dollar index (DXY) reacted, running up to 97.35 as Fed Vice Chair Richard Clarida said the Fed should continue to raise rates gradually while monitoring new economic data.

However, the metal would regain nearly all that ground on Wednesday, as Fed Chair Powell suggested interest rates were just under the estimates of where they needed to be for a neutral level for the economy. On those words, seen as more dovish than his previous comments, the dollar index dropped in dramatic fashion from 97.5 to 96.5. That boosted silver from $14.15 to $14.35 within minutes.

On Thursday, silver basically moved sideways as the DXY consolidated.

Here's the dollar index's action for the past trading week: 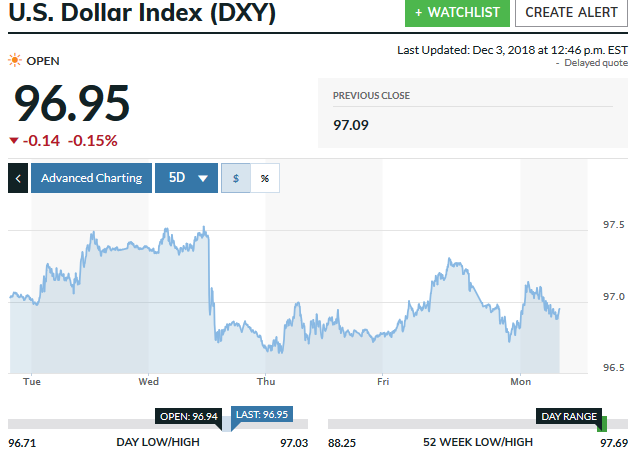 The workweek ended Friday with renewed DXY strength pulling the index up to 97.25 as investors eyed the G-20 meeting that would take place the next day. That midday dollar rally pushed silver down to bottom at $14.02 before it clawed its way back to close at $14.15.

But Monday's action was very bullish as a new China-U.S. trade truce took some froth off the DXY, allowing silver to rally as high at $14.55 just after 9 a.m. It then worked off some of those gains, though still traded at $14.40 by 2 p.m.

Now that we've seen how the price of silver is moving now, here's how I expect the precious metal to move as we head toward 2019...

What's Next for Silver Prices Ahead of 2019