The Dow Jones Industrial Average projected a small gain in pre-market hours as investors awaited the arrival of the November jobs report. 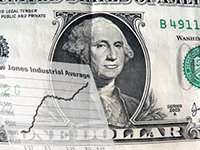 This morning, the Department of Labor said that U.S. unemployment remained at a 49-year low.