Last month, the United Nations issued a major report on climate change. It was a dire warning about the future of the earth's environment, but it was also an opportunity for investors.

Billions of dollars are going to flow into the clean energy industry, and we've uncovered the top renewable energy stocks to buy in December...

In the report, The United Nations Intergovernmental Panel on Climate Change (IPCC) said that even full implementation of the Paris Accord signed three years ago is not enough to avoid environmental damage of catastrophic proportions. 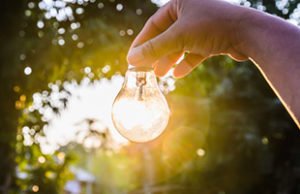 The IPCC estimates that carbon emissions, for which fossil fuels are largely responsible, will need to be reduced by 40% to 50% in just 12 years. Otherwise, we are going to see falling productivity, global health challenges, and weather pattern alterations that will cause billions of dollars' worth of economic damage.

That's creating a huge market for renewable energy to the tune of $1 trillion per year.

As the world wakes up to the severity of the threat, the best renewable energy stocks could realize huge profits for their shareholders.

And that's great news for you.

We're going to show you top renewable energy stocks to buy in December so that you can profit today...

How Clean Energy Can Become a $1 Trillion Industry

The International Energy Agency (IEA) estimates that spending worldwide on cutting carbon emissions will reach $1 trillion each year, on average, through 2050. That's more than double the current amount spent at $400 billion a year.

This huge cash infusion will drive money toward the best alternative energy companies.

Take this estimate for example.

The IPCC reasons that if the planet's temperature rises just 1.5 degree Celsius by the end of this century, the economic costs are going to surge to $54 trillion. If the earth's temperature rises even 2 degrees Celsius in the same time frame, the damage will cost $69 trillion to repair.

That means the cost of combating climate change is a mere fraction of the cost of the potential damage. And it also means the longer the world waits to act, the more money they'll have to spend.

Some Companies Are Poised to Benefit from Spending on Climate Change

Companies engaged in renewable power generation, especially solar power, will likely be the first companies to benefit from spending on climate change, and they are likely to benefit the most as well.

The demand for their services will likely cause the share prices to climb.

But even though these are well-positioned companies, they aren't our top pick.

We're going to give you two of our top renewable energy stocks below.

Both have a perfect Money Morning Stock VQScore™, which means they are primed for growth right now.

One company pays a robust dividend yield over 8%, more than triple the yield for the S&P 500.

And analysts are already projecting our next clean energy stock could surge 65% in 2019 alone...

It is without a doubt true that we will see billions and billions of money poured into the clean and renewable energy industry in the coming years. GREAT investment opportunity!