There's a stock market crash just around the corner.

And the trigger - runaway corporate debt - is something few are talking about.

This has been brewing for years, forged from the extraordinary measures taken to dig the economy out of its last mess - the 2008 financial crisis.

And when it strikes, it will cost unprepared investors dearly. That's why you need to start paying attention to this now.

"Corporates, not consumers or banks, will cause [the] next recession," Michael Hartnett, Bank of America Merrill Lynch's chief investment strategist, told clients in a note in September.

One reason you don't hear too much about the corporate debt crisis is that it sounds dull and hard to understand (there's some truth to that).

Another reason is that until the past year or so, historically low interest rates had kept the corporate debt crisis at bay. Low rates meant low, affordable payments - even for companies that were loaded with debt.

Years of low rates encouraged companies to use debt to finance everything from stock buybacks to huge corporate merger deals.

But that started to change when the U.S. Federal Reserve began hiking interest rates in 2015 from near-zero to 2.25%. And several more increases are expected next year.

Approximately $3.5 trillion worth of corporate debt will come due in the next three years - which means it will need to either be paid off or refinanced at higher interest rates. As more debt rolls over, the stress on companies' balance sheets will rise.

That spells trouble for the bond markets, over-leveraged companies - and the stock market.

According to S&P 500 Global Ratings, U.S. companies have collectively accumulated $6.3 trillion of debt. That figure doesn't count banks and represents an all-time high.

Even more worrisome is this steep rise in riskier debt. According to UBS, the dollar value of high-yield corporate bonds - otherwise known as "junk" bonds - has nearly doubled from $781 billion in 2010 to $1.3 trillion in 2018.

And the most at-risk companies are in an increasingly precarious position. According to S&P 500, companies with junk-rated bonds have $8 of debt for every $1 of cash.

The quality of investment-grade corporate bonds has slipped as well. The lowest-rated investment grade bonds, BBB, now make up nearly half of the $5 trillion market for investment grade debt. In 2008, BBB bonds made up just 36% of the total.

In September, the Bank of International Settlements reported that the number of U.S. "zombie stocks" - companies with income insufficient to cover their debt interest payments - doubled between 2007 and 2015, to about 10% of all publicly traded companies. More concerning is that 14% of the stocks in the S&P 1500 - which covers 90% of the market capitalization of U.S. stocks - are zombies.

History tells us that when corporate debt levels get this high, there are consequences for the U.S economy. Take a look at this chart: 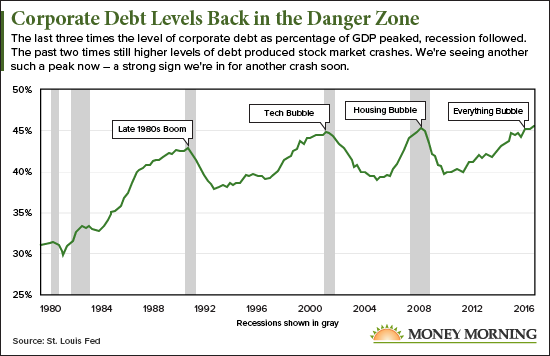 The chart measures U.S. corporate debt outstanding as a percentage of gross domestic product (GDP). Over the past 30 years, spikes in this ratio have preceded the last three recessions. In the last two cases - the dot-com crash and the 2008 financial crisis - the recession was accompanied by a prolonged stock market crash.

As you can see, the ratio of corporate debt to GDP is again back to levels where it was just prior to the last two recessions/stock market crashes.

How Corporate Debt Will Wreak Economic Havoc in 2019

As the corporate debt bubble pops, it will send shock waves through the economy.

You'll see a rise in defaults on corporate debt, starting with the zombies. Those stocks will fall and drag the markets lower as worries build about more defaults.

Other overleveraged companies will be forced to pull back on hiring or lay off workers and reduce investments in their businesses. They'll also have to cut back sharply on share buybacks, which has been one of the factors that has driven the bull market for stocks.

You'll also see problems in the bond market. You see, the desire for yield in the low-interest environment meant that investors ended up paying more for better yields, which ironically reduced yields. Many bonds purchased in recent years failed to properly price in risk as a result, and will get hit hard when the debt bubble bursts.

Billions of dollars' worth of bond investments will be lost, which will have a chilling effect on the credit markets.

This is the sort of scenario that usually results in a recession and stock market crash.

That means investors need to take precautions now, while there's still time to protect the profits you've made over the course of the nearly decade-old bull market.

thanks for the opportunity

I LOOK FORWARD TO RECEIVING YOUR THOUGHTS