Investors have an opportunity right now to get in on the ground floor of an exploding industry that would be the equivalent of investing in Anheuser-Busch in 1933.

This December marks the 85th anniversary of this country's 21st Constitutional amendment, which effectively ended a 13-year failed experiment with "Prohibition." 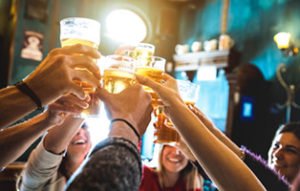 Pot stock investors or anyone looking for the best cannabis stocks to watch will see the parallels with the events that took place in the last century.

As something that was once illegal and only made money for criminals gets the nod from federal and state regulators, this opens up the door for massive profits for investors as well as much-needed public revenue.

Dec. 5, 2018, marked the anniversary of "Repeal Day," meaning Americans were once again legally permitted to have an alcoholic beverage. Before that, there was 13 years' worth of sneaking around and underhanded business practices by those who fed an insatiable demand.

You see, the ones who were raking in cash from "Prohibition" were the gangster types who managed to transform once-peaceful neighborhoods into violent crime zones as they battled for territory.

The tide began to shift when some of the strongest supporters of Prohibition had a change of heart. Among them were people like John D. Rockefeller, a confessed "teetotaler" who was quick to admit that this was an experiment that wasn't working out.

His change in sentiment was one of the catalysts to bring about a radical shift.

This has some strong parallels with what we are seeing in today's marijuana market...

Changes We Would Not Have Seen Just a Decade Ago

History does tend to repeat itself in glorious fashion, and we are seeing some of the same patterns in the legal cannabis market.

If you're looking for pot stocks to watch, it would make sense to pay attention to these developments.

Just like Rockefeller, there are powerful people in the United States formerly opposed to cannabis legalization as a way to further their "war on drugs." Now seeing that this is a losing battle, many have had a change of heart.

Instead of deterring drug use, criminalizing marijuana use has only made violent criminals richer and hurt otherwise innocent and law-abiding people.

One example is former House Speaker John Boehner, who was once a strong opponent of legalizing marijuana.

Now, he has become one of the most vocal advocates for this industry and is even on the board of a large cannabis company called Acreage Holdings.

Boehner's opinion changed on this topic after just one conversation with an injured American service member.

And this is just the tip of the iceberg...

Many other public figures are either publicly advocating change, doing so quietly, or even joining major cannabis companies. Even former White House Chief of Staff John Kelly defended cannabis use by veterans suffering from physical ailments and PTSD when he declared that "medicine is medicine."

You see, there are even more parallels with marijuana and the failed attempt to stop sales of alcohol...

Similar to the federal ban on marijuana, some states simply didn't fall in line with what the feds were trying to accomplish with "Prohibition."

They didn't agree with it and had no desire to spend state funds on policing something that they saw as unnecessary.

This is yet another lesson that regulators could re-learn today relative to public revenue from taxes.

If you know anything about 1929, this is the year that the country fell into the Great Depression.

The ban on sales of alcohol meant that there was a sharp decline in government tax revenue, occurring at exactly the same time that the country needed the money. This was a revenue hit to the tune of roughly 50% from 1930 to 1933.

When the impact of this move became clear, this was when some of the most vocal proponents of "Prohibition" changed their tune and became opponents. Support on the state side was faltering, and there wasn't much enthusiasm left to enforce the laws on the federal front.

In the end, Franklin Delano Roosevelt won the presidency in part on a platform that promised a Prohibition repeal.

This entire scenario should seem eerily familiar to the state of affairs with respect to cannabis in this country right now.

And we've uncovered the biggest profit opportunities as the ban on marijuana fully fails...

The Biggest Move to Make in the Marijuana Industry