The price of gold is starting to catch fire thanks to the stock market's latest struggles.

Gold could be in store for a strong 2019, even if stocks recover from their recent dramatic sell-off.

Gold wrestled against the dollar between May and November as the DXY rose from 89.5 to 97.5.

But just as the dollar index peaked mid-November, gold put in a bottom from which it has risen an impressive 7.8% so far.

The dollar has struggled since then. Multiple signs suggest that the dollar's trouble will continue this year. But despite stocks peaking in the fall, we've avoided a crash or sustained bear market.

And several indicators of worse to come, like an inverted yield curve, haven't materialized. So stocks could continue climbing for a while before their final bull peak.

But that doesn't mean gold can't rise as well. And the latest noises from the U.S. Federal Reserve suggest stocks and gold prices could move higher together this year.

Here's what's been happening to gold prices lately - and what that means for my latest gold price prediction...

As I've been saying lately, the Fed definitely considers what happens in the markets.

That's why on Friday (Jan. 4) Fed Chair Powell, speaking on a panel along with former Fed chairs Yellen and Bernanke, said the central bank's policies were flexible and that he and his colleagues were "listening carefully" to financial markets.

It seems the late December cascade in stock indexes was enough to make them blink. That feedback reassured markets that a pause in rate hikes was now more likely.

You can see how the DXY held about even after the New Year's holiday last week... 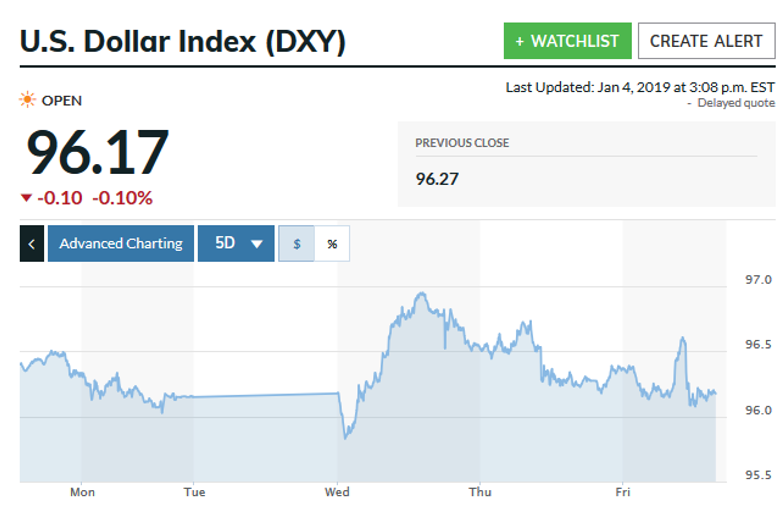 But Friday's jobs data showed 312,000 jobs created in December, higher than the 179,000 jobs forecast, accompanied by an increase in wages. That strong labor news temporarily boosted the dollar and dented gold.

The precious metal bottomed at $1,276 mid-morning, then bounced back as Powell's dovish speech caused the DXY to backtrack, sending stocks soaring with the Dow up over 700 points.  Gold traded around $1,285 by mid-afternoon.

This is all excellent news for gold, and I'm adjusting my gold price prediction upward even more.

Let's dig into the technical indicators a bit more and see just how high gold prices can rise in Q1 2019...

My Newest Prediction for the Price of Gold in 2019