2019 is gearing up to see a record number of high-flying cannabis IPOs hit the market - each capable of unleashing millions of dollars into the market.

It's a true investing phenomenon.

Within the next five weeks, we could see as many as 10 private cannabis companies go public. 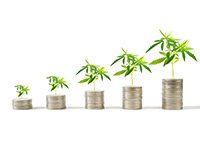 According to our research, four of them could set new opening-day records.

In fact, each of these companies is capable of generating between $500 million and $3 billion for investors the day they go public.

And the best part is you can lock in life-changing profits right along with them, even if you've never invested before in your life...

This IPO Explosion Could Mint a New Generation of Millionaires

IPOs are when a company's stock first goes on sale to the public.

And most of the time - for successful IPOs - it's the cheapest price you'll ever pay to own an up-and-coming landmark company.

Just look at the kinds of returns people have been seeing.

And cannabis IPOs are happening at a frantic pace right now.

The reason is simple: Cannabis is the fastest-growing industry in the world.

Today, the cannabis market is worth $8.5 billion. But in just a few years, it's going to grow into a $146 billion market.

We are witnessing a seismic shift in the global cannabis market right now.

Cannabis was fully legalized in all of Canada last year.

In the United States, 33 states and growing have legalized medical marijuana.

That's why, over the last few months, an unbelievable upsurge in record-shattering cannabis IPOs is taking the industry by storm.

People from all walks of life are making tens of millions of dollars from these IPOs.

And this trend is only accelerating.

Here's how to profit from the world's most exciting investment opportunity...

IPO Expert Reveals the Secret to Making Millions from Cannabis

The most exciting cannabis IPO opportunity we've seen this year is about to hit the market.

You need to know about these four companies before other investors are scrambling to play catch-up.

Right now, each one of these companies is capable of generating between $500 million and $3 billion for investors the day they go public.

We've laid out all of the details on these four IPOs - and how you can get in on them even if you've never invested a dollar in your life - right here.