Volatility reached a five-year high in December, and a downturn could be on the horizon according to the indicators we're watching.

In fact, one indicator that predicted the last two recessions and market crashes is very close to reaching the danger zone. But it's not time to panic. We'll show you exactly what's going on and what you need to do to stay profitable as the market keeps swinging higher and lower…

If you think the market over the past few weeks has been different than it was during the "good old days" of 2017, you are right. Check out this chart of the average true range in the S&P 500. The change is unmistakable. 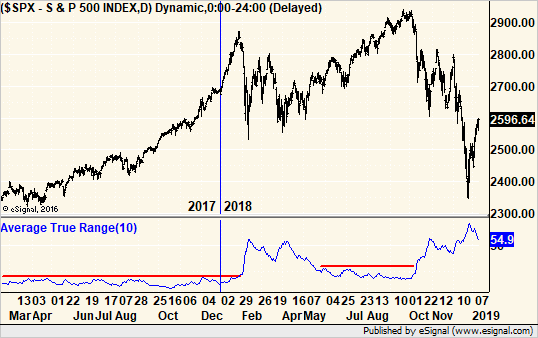 The true range of the market is the difference between the daily high and daily low, but it takes into account any market jumps from the previous day's close. In other words, it puts the day's gyrations in context.

This chart smooths that out with a 10-day average, and you can clearly see that December-January volatility was far greater than it was a year ago. Look how blissfully low it was in 2017!

Nobody knows for sure why volatility is up, but there are plenty of reasons why investors are nervous. The trade war is definitely one of the top reasons, and we can see big moves higher and lower on any given day based on the progress made between the United States and China.

While trade is, of course, very important, the domestic economy itself is also key.

And one indicator used to forecast recessions is adding to investors' unease.

In the past, when it fires a signal, a recession follows.

If the economy falls into recession, a market crash could be next…

The Best Recession Indicator to Watch

The recession indicator to be paying attention to right now is the yield curve.

As it steepens, the experts follow it even more closely. The yield curve is simply a plot of interest rates across the U.S. Treasury market by maturity from three months out to 30 years.

When the economy is healthy, the plot of the yields for each security forms a line curving up. But when the line inverts or begins to curve down, trouble is ahead.

Just to see how close we are to an inversion, we're looking at the chart showing the difference between yields in the 10-year and two-year Treasury. When the difference falls below zero, then the curve has inverted.

As you can see from the chart, a recession followed the last two reversions.

And we are quickly approaching another one…

Couple that with a Federal Reserve bent on raising short-term rates, and an inversion is almost an inevitability.

But now isn't the time to panic. It's time to use the knowledge to profit…

How to Make Money While Volatility Is Rising