The Dow Jones today is opening more than 150 points lower thanks to a troubling economic report out of China.

Yesterday, China reported its economy grew 6.6% in 2018, the lowest growth rate it's seen since 1990. Even worse, its fourth-quarter GDP grew just 6.4%, signaling the slowdown was deepening.

As the government shutdown drags on, the weakening global growth could send stocks back into the red. 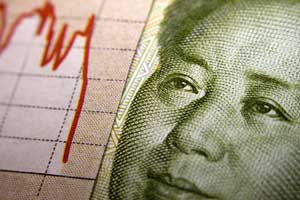