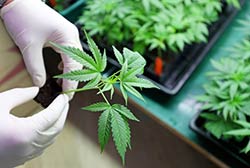 Marijuana is truly the next gold rush. Marijuana stocks had an incredible ride in 2018, as more states and countries continue to legalize cannabis.

But we're now turning our attention to a flood of marijuana IPOs that we expect to happen this year. IPOs (initial public offerings) bring private companies public and open them up to investment by the public.

Legalization and Expanding Markets Will Drive Marijuana IPOs in 2019

The market for marijuana is expanding rapidly in the wake of the last three years of legalization.

Major U.S. states have made cannabis legal, either for medicinal or recreational purposes, or both. The entire country of Canada made recreational marijuana legal in 2018.

Right now, medical marijuana alone is legal in 60% of the United States.

Of course, the more marijuana is legalized, the more people will buy it. It also means that companies will start producing products with weed as an ingredient. Medical treatments are being developed. Products like liquor and beer infused with marijuana are likely. Edibles have become a big business.

Businesses that work with marijuana, like agricultural producers, stand to benefit.

Legalization and the growing acceptability of marijuana will also decrease the stigma that surrounds it.

And the coming marijuana IPO gold rush will open up the profit potential of the legal weed industry even more. That means investors can profit handsomely by investing in the right marijuana companies.

Alexander Topchishvili is a member of The Blinc Group's advisory board. He believes that the first event driving the legal weed IPO rush is that big banks are now on board with the marijuana industry.

Historically, big banks have wanted nothing to do with the cannabis industry.

The reason was easy to see. It was an illegal substance for a long time, and banks didn't want to be associated with it. Bankers, you see, don't like risk, and operations outside the law are full of risk.

Even when the push toward legalization began, banks pretty much eschewed the marijuana business. Even in states where pot is fully legal, it remains illegal on the federal level. Well, the U.S. government regulates banks. Banks don't want to mess with the governmental entity that regulates them.

This has historically affected the marijuana industry negatively.

Startups especially rely on loans to make it through their initial years and to expand.

As a result, marijuana companies couldn't go public as easily as other types of companies.

But that's about to change.

Financial institutions are quietly working with pot companies behind the scenes, as a result of legalization. And the more that happens, the more likely marijuana IPOs become.

But the next event is equally important and could drive marijuana IPOs and potential profits even higher.