Pitney Bowes stock is a terrific opportunity right now - though it may not look like it at first glance.

The five-year chart is about as bad as it gets. 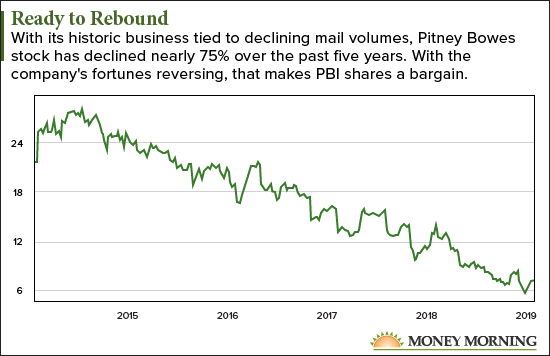 The company's historic business of selling postage and mail production equipment to other companies has declined along with mail volumes over the past decade or so.

In fact, Pitney Bowes is in the midst of a years-long turnaround - but many investors remain skeptical. Short interest rose from 3.5% of the shares outstanding in May to 9% now (the average short interest among companies in the S&P 500 is 4.2%).

But in this case, as they say, it's all a matter of perspective.

If you think the company's turnaround strategy will succeed, as I do, then PBI stock is a screaming bargain right now.

Pitney Bowes Is Already Past Its Hardest Days

The fate of the turnaround is the key to the Pitney Bowes stock price. It's been underway since 2012, when the company hired Marc Lautenbach, who spent 27 years at International Business Machines (NYSE: IBM) in several senior positions, to serve as the new CEO. 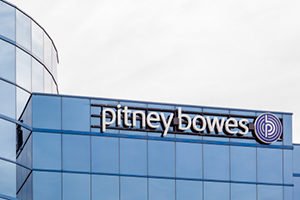 That early start matters. Think of all the companies that only tried to address a failing business model when it was already too late, such as Eastman Kodak (NYSE: KODK) and Sears Holdings Corp. (OTC: SHLDQ).

Lautenbach first set out to stabilize Pitney Bowes' legacy businesses - mail is declining, but it has been a gradual decline. The company has sought to hang on to as much of this business as it can for as long as it can because of the plump profit margins - over 40% on its U.S. mailing business, for instance.

Next, Lautenbach developed a strategy to transition to new areas where Pitney Bowes will be able to grow revenue. The company acquired a number of software businesses, including one that calculates taxes automatically for clients and another that provides location data.

The company in particular is focused on serving the rapidly growing e-commerce industry. That drove Pitney Bowes' biggest and most important acquisition in 2017, the $475 million deal to buy Newgistics, a provider of parcel delivery, returns, fulfillment, and digital commerce solutions for retailers and e-commerce firms.

At the same time, Pitney Bowes divested several businesses that no longer fit the new strategy. The company used the cash from those deals to finance the new acquisitions as well as to pay off some debt.

But after several years of uneven performance, particularly in 2017, Lautenbach's efforts have begun to bear fruit over the past two quarters...

And there was plenty of evidence the turnaround is succeeding.

Overall, EBITDA grew by about 4%, but the point is that the turnaround showed clear signs of gaining traction.

The overall results weren't necessarily stunning, but the numbers confirmed the turnaround strategy is working. PBI stock jumped 19% on the news.

Since then, the stock has backtracked as wary investors sold amid a period of market volatility.

And while I believe Pitney Bowes is a solid long-term play - this stock should see gains of 60% or more over the next 12 months alone - something could happen in the next couple of weeks to spark some big short-term gains...

Why PBI Stock Is Bound to Go Higher

I really want to profit from what you have to offer

I hope Pitney Bowes will perform best in near future.
Keeping fingure crossed

I used to own my own ISP. Pitney Bowes always provided excellent service. Here's hoping they make out.

are you connected in any way with pitney bowes

Thanks for reading Money Morning. I have no association with Pitney Bowes. We use our VQscore to screen for stocks like these with significant growth potential to give our readers investing ideas.