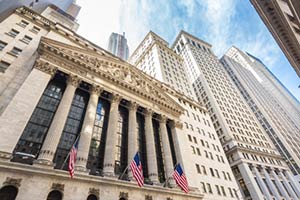 The Dow Jones Industrial Average will try to hold above the 25,000 level after a 434-point surge Wednesday.

This morning, Dow Futures projected a small decline as investors weighed earnings reports and a breaking development that U.S. and Chinese officials are negotiating a meeting for later this month between U.S. President Donald Trump and Xi Jinping.

Now here's a closer look at today's most important market events and stocks...