The U.S. Supreme Court's decision to legalize sports gambling in the United States will unlock billions of dollars for investors, casino operators, and even restaurant chains looking to get in on the action. 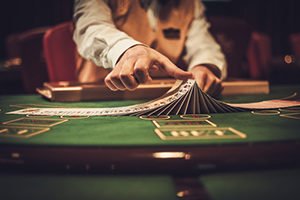 Legalized gambling could make the NFL up to $2.3 billion per year. The NBA and MLB combined could generate $1.7 billion a year. And the NHL is looking at a $200-million-per-year payday.

That's just a taste of the profit potential sports gambling stocks could bring.

But it's difficult to tap directly into the actual sports leagues. And I've already outlined how we can make money off states with legal sports books. Pennsylvania, for example, has multiple teams in all four major sports and legalized sports gambling. That could be worth $12 billion a year, which will boost tax revenue and make its highly rated bonds even more attractive investments.

Today, I'm going to show you a completely new way to tap into sports gambling and the $76 billion sports entertainment industry.

And this gambling stock has the potential to double your money nearly overnight...

Auto racing is the seventh most popular sport in the United States. And it could be the big winner of legalized gambling.

"Interest can be generated for NASCAR and a lot of different sports just because people will now have a betting interest in the outcome," Denis McGlynn, CEO of both Dover International Speedway and Dover Downs Gaming & Entertainment, told ESPN last May.

If you'll recall, I recommended Dover Downs stock to our readers right after the Supreme Court decision. The firm was purchased by the Rhode Island casino operator Twin River, banking returns of up to 103% for our readers.

You see, I knew sports gambling in proximity to racetracks would provide a jolt to the sport. Sure enough, the Dover Downs Hotel & Casino's race and sports book have been a lively location, according to an October 2018 report from The Washington Post.

And when I recommended Dover Downs, it was a severely undervalued stock. In fact, at the time, the owner of Dover International Speedway was trading at a paltry 0.5 price-to-book value.

That's red meat for companies ready to expand their gambling business. More importantly, it could mean big profits for you too, which is how our readers were able to double their money on the buyout. Paid-up subscribers are also seeing even more lucrative deals - with upsides of 300%, 500%, and even 787% - thanks to our Max Wealth approach. Check it out here.

Now, I'm looking at another undervalued business ripe for a takeover. But something else about it caught my eye.

In January, NASCAR issued a new rule barring drivers and team members from gambling on the sport. That might seem like an obvious rule to make, but it went deeper than that.

I got the hunch that the sport is going to make a bigger splash and welcome greater integration of gambling like the other major sports in the country. So, I started to look around the sport for opportunities to make money.

And I've stumbled on a must-own company that is a surefire acquisition target given its significant assets in NASCAR.

Not only is this company massively undervalued - just like Dover Downs was - but its racetracks and other assets are worth more than the company's market capitalization. That makes it a prime acquisition target for the year ahead.

Here's your next chance to double your money...

Put Your Foot on the Gas with This Sporty Pick