With growth slowing in China and Europe on the verge a recession, it's time to ask if a stock market crash this week is possible.

Remember, we're already in the longest bull market ever, and stocks are showing signs of weakness. December closed out with its worst performance in 30 years. 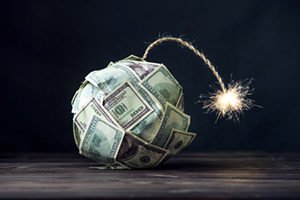 Now, stock market crash predictions can never be made with absolute confidence, of course. No one can say with certainty when the next market crash will hit. But we can be strategic and use the best evidence in front of us.

No market goes up forever. Whether we get a stock market crash in 2019 or a simple bear market, we'll likely see a pullback at some point. While stocks recovered slightly since December, we're still on a shaky foundation.

But this is the biggest threat to the market right now, and prepared investors can not only protect their cash, but turn a profit from the fallout…

A Stock Market Crash Could Begin with Debt

One of the biggest warning signs of a coming market crash is the global debt crisis. It could start a stock market crash next week.

Those are staggering numbers, but it gets even worse. The debt is more than four times global gross domestic product (GDP) – specifically, it's 318% of worldwide GDP.

If you owed 318% of your annual income each year, then you'd be facing a serious crisis. The same goes for the global economy, and for the same reason. Debt inevitably cripples growth, as all spending eventually gets siphoned into debt payments.

In the United States specifically, total debt hit $21.79 trillion in November 2018. Interest on it is forecast to rise by a minimum of $10 billion annually.

But even that's not the worst news.

In fiscal 2018, the U.S. government ran a deficit of $779 billion. The primary driver is the tax cuts enacted by the Trump administration. Government inlays fell drastically, but expenses weren't cut accordingly, ballooning the debt even more.

The deficit is the biggest in six years, and it is forecast to keep growing.

The situation in the world's second largest economy, China, isn't good either.

Since the fiscal crisis of 2008, China has printed more currency than the United States has. Right now, its currency, the yuan, is weak vis-à-vis the U.S. dollar. But a lot of the country's debt is based on the dollar. The debt of the Chinese government alone might be roughly $6 trillion, according to a recent CNBC report.

At some point, China may find repayment difficult.

Then there's the entire world. The International Monetary Fund publishes a World Economic Outlook report each year. In the most recent one, it reported that many nations had slashed interest rates and printed money to stimulate economic activity after the financial crisis of 2008. That not only added to each country's debt, but it left them with fewer options to combat the next crisis.

Smart investors know this situation is unsustainable. We can see that in the bond markets.

When interest rates rise, the price of bonds and notes drop. The Bloomberg Barclays Multiverse Index shows that, as a result of the interest rate rise, $1 trillion in bond values vanished in only three weeks from September to October last year.

That's a troubling sign of where we are heading. But you don't have to be caught holding the bag when the fallout beings.

Here's exactly what to do…

A Profit Plan for the Next Economic Crisis