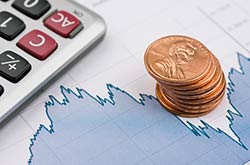 That's left us with three top penny stocks to buy right now, including one that could skyrocket more than 250%...

It could nearly quadruple your investment...