Access Your Profit Alerts
Sign Up for Money Morning and get your free report:
"The Best Stocks to Buy Now"
How to Buy Bitcoin
Twitter
Stocks: VSLR
View Comments 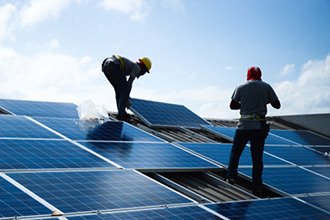 Today, I'm going to show you one of the best penny stocks you can buy right now. You see, this stock is a play on the solar industry, which is absolutely booming.

A lot has happened over a short period with respect to the solar power industry. For much of 2018, oil prices were soaring and reached their peak in November at close to $70. Most of this increase was due to higher interest rates from the U.S. Federal Reserve and a strong dollar.

As crude prices climbed, so did the price of solar stocks.

This wasn't just a small bump, either. In just a few short months, there were jumps of 50% or more on some of the top solar stocks.

Sadly, this rally was short-lived.

Toward the end of 2018, there was a market rally in bonds and another interest rate hike took the dollar much lower.

The price of crude oil dropped when the dollar lost momentum and traders pulled out of solar stocks to lock in profits.

Market volatility didn't help either. What began as a 50% bump in solar stocks ended up being losses of almost 20%.

This wasn't the first time this has happened with solar stocks either.

There was a major rally with solar stocks several years ago when the price of oil was over $100 per barrel. The solar industry was young at that time, and some of the early investments were followed by share price losses.

However, investors were not fazed.

Compared to where they trade today, solar stocks were trading at prices that were three and four times higher.

So, why get excited about solar stocks now?

The truth is that we've seen this before, and there is still plenty of evidence that the next solar boom is right around the corner…

There Is a Massive Solar Boom on the Horizon

To start, there are more green initiatives than ever, which has been a windfall for solar companies.

And those initiatives will continue into the coming years.

Solar Estimate reports that solar energy is now the cheapest way to power a home.

According to some estimates, there were an estimated 2 million residential solar installations in the United States by the middle of 2018. This is a figure that is expected to double over just four years.

Plus, a stronger dollar environment and rising interest rates will be ideal for solar stocks.

Long term, an investment today could double or triple in value.

Knowing this, what are the best solar stocks to buy?

The market has been volatile of late, but the economy continues to do well. This is evidence for a stronger dollar in 2019 and good news for the solar industry.

When it comes to picking solar stocks, the best ones will be positioned so that they benefit from green initiatives. These are primarily companies that deal with solar installations.

As oil prices go higher, this will be an additional catalyst for these types of stocks to move up.

Here is our pick for the top penny stock to buy now in the solar sector.

Organigram holdings has already made me 1400 percent since last July.

This is an excellent way to secure your retirement. Teach me.
I have the Money Morning.