Today’s economic news should bring a smile to any investor’s face, but the threat of a global recession looms ever closer.

Unemployment is near record lows, and among post-9/11 veterans, it is the lowest it’s ever been. The jobs report last week shattered expectations, GDP is growing, wages are up, and manufacturing is coming back into this country. After a sharp decline to end 2018, the stock market came roaring back, powered by these excellent economic numbers.

But conditions are not so rosy in the rest of the world. Global growth is faltering, and it could be just a matter of time before the world’s economy grinds to a halt.

There Are Recession Triggers Everywhere

First, China’s economic growth last year was the slowest it’s been in 28 years. The second largest economy in the world is no longer performing as the envy of the financial world.

There were signs last year that this was coming, long before the specter of a trade war with the United States reared its head and tariff battles began. European exports to China were down sharply in 2017. And Chinese year-over-year import comparisons from all over dropped sharply throughout the year and into negative territory.

The Clock Is Ticking: Millions of American retirement plans hang in the balance – and if you’re not doing this, you’re in for a nasty shock in a few weeks. Click here now…

The Wall Street Journal reported that Beijing is struggling with domestic economic weaknesses, which includes ballooning debt, overinvestment, and constraints on private businesses. The combination knocked down growth to its slowest rate in three decades.

The real problem is that China’s weakness is already creeping into American firms. Apple Inc. (NASDAQ: AAPL), Nvidia Corp. (NASDAQ: NVDA), and a slew of other firms are already pointing the finger at China to explain slowing revenue and weaker guidance.

Unlike the Chinese stock market, which was one of the world’s worst performers in 2018, the effects of China’s economic slowdown have spread into the real economy. Its impact on the rest of the world will be much greater. 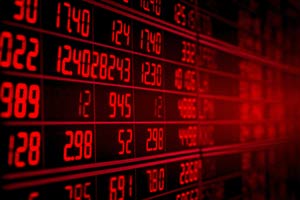 That might seem like a minor problem, but Germany is the economic engine of Europe. That’s especially true as Brexit nears and threatens to destabilize the region and further hurt the already weak UK economy.

Italy is mired in a debt crisis with no end in sight, so it will not be able to handle an overall German-led European slump. France’s growth is anemic, and people are protesting in the streets. Since the European Union is the United States’ largest trading partner – even bigger than China – a downturn there could be even worse than China’s slowdown for the domestic economy.

And these triggers couldn’t be coming at a worse time.

While the U.S. economic numbers have looked great, there are signs they are peaking. The economy roared to life after the 2008 financial crisis, launching the stock market into the longest bull market every recorded. But as every investor knows, bull markets don’t last forever.

The American economy could start sliding down the mountain in a hurry if the rest of the world slows down too. In fact, economists at Cornell University believe the steady growth we’ve seen over the past decade will soon come to an end, likely by the end of the year. They see a gradual decline in reaction to the Federal Reserve raising interest rates and, in turn, interest-sensitive sectors cooling off.

Basically, we are nearing the peak of the business cycle. It’s nothing sinister, but rather a natural ebb in the flow of economic performance.

It’s Time to Play Some Defense

Money morning has what all investors and business want to know.