Cryptocurrency taxes could actually pay off this tax season for investors who traded crypto in 2018.

But few of them are taking advantage of it.

According to a survey by Credit Karma, U.S. investors realized losses of $1.7 billion in 2018. More than a third - 35% - said they did not plan to report their crypto losses to the IRS. 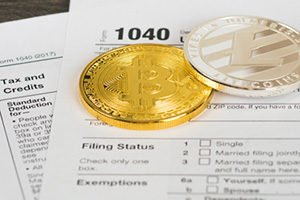 But the losses average out to $718 per crypto investor. And that's definitely worth reporting. As painful as such losses can be, investors owe it to themselves to minimize them by claiming them as capital losses on their taxes.

We saw this phenomenon last year in reverse, as most crypto investors failed to report realized gains they had in the boom year of 2017. (Maybe that's why some are reluctant to use their losses this year.)

And it's not so much that they're all trying to evade taxes; the unwillingness to claim losses from 2018 suggests most crypto investors simply don't know what they're supposed to do.

I lay much of the blame on the IRS for not bringing clarity to cryptocurrency taxes. The one statement the agency made in 2014 is inadequate and badly needs updating. I've made this point again and again, but all we've gotten from IRS is radio silence.

Today I'm going to explain in plain English the particulars of cryptocurrency taxes so you don't miss out on any refund money the government owes you.

What You Need to Know About Cryptocurrency Taxes

You have two kinds of capital gains taxes: long term and short term. Long term is any investment sold after being held for at least one year. Short term is for investments held less than a year, likely to be common among crypto traders.

Long-term capital gains have their own tax rates ranging from 0% to 20% (although it's based on your taxable income).

Short-term capital gains are taxed as ordinary income. In other words, the gain is added to any other taxable income you have in that year.

But what if you had no gains?

You can deduct up to $3,000 of losses against your income in any given tax year. While not a huge sum, it will increase your refund (or reduce what you owe). If you have a loss larger than that, you can carry it forward to offset gains in future tax years. Or you can keep using the $3,000 deduction each year until the full amount of the loss is exhausted.

So if you had a $10,000 capital loss on your crypto trading in 2018, it would take four tax years to fully deduct the loss - assuming you had no capital gains in any of those years.

None of that is unique to crypto taxes.

But one tricky difference where crypto is concerned is that investors need to track their basis cost - what they paid to buy the crypto - themselves. You need to know the cost basis as well as the price for which you sold the asset to calculate your gain or loss.

Retail stock brokers do all that for you and send you a 1099-B form in the mail, but crypto exchanges do not. (The lack of a document in the mail may partly explain why so many crypto investors don't think they need to report their trading to the IRS.)

At best, you'll be able to download a record of all your transactions so you can calculate the cost basis yourself. Using a service like CryptoTrader.Tax, CoinTracker.io, CryptoTaxPrep.com, Cointracking.info or Bitcoin.tax helps, but it's still an extra step that costs extra money.

To report crypto transactions on your taxes, you use Form 8949, which becomes part of Schedule D.

Now, if that's all there was to it, figuring cryptocurrency taxes would only be a bit more inconvenient than dealing with other capital gains taxes.

But crypto has issues stocks don't have...

Why We Need More Clarity on Crypto Taxes

This article just shows how far afield crypto currencies have deviated from their intended purpose. They were never meant to be an investment tool, they were meant to be an underground medium of exchange free from government oversight. I’m glad I don’t own any because I knew this would happen.