Even though gold prices broke out in a big way to start the year, they've reached a lull in February. But this is actually a good thing.

Gold was up 3.1% in January alone and was up 10.3% between mid-November and the end of January.

Consolidation is not only to be expected; it's healthy. What we need to watch for now is how long it lasts and how much gold prices correct. 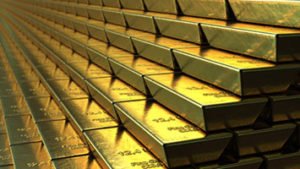 And President Trump's speech on Tuesday (Feb. 6) provided little in the way of catalysts, other than possibly helping to buffer the dollar as traders grew weary of trade wars.

Looking at the movement of gold prices over the last six months, we can see it's following a unique pattern – what I coined the "golden staircase" years ago. That's when gold moves up, then sideways, and repeats the process in a discernable pattern over months and even years.

So despite a week that brought a relief rally in the dollar, gold still managed to hold its own as it contemplated a period of consolidation.

And given the robust buying from central banks in 2018 and institutional investors over the last several months, gold is looking solid indeed. I expect gold to continue to climb the golden staircase, and I'll lay out exactly where it's headed in my latest gold price prediction below…

After closing around $1,317 the previous week, the price of gold started out Monday on a weaker tone as the U.S. Dollar Index (DXY) gained some steam. It climbed to 95.85 that morning and then moved sideways. Gold prices weakened initially but closed at $1,312.

Gold prices managed to hold around $1,314 through most of Tuesday, even as the DXY climbed above 96. But as the DXY sailed higher on Wednesday (Feb. 7) in the wake of the State of the Union address, gold succumbed and closed the day at $1,306. 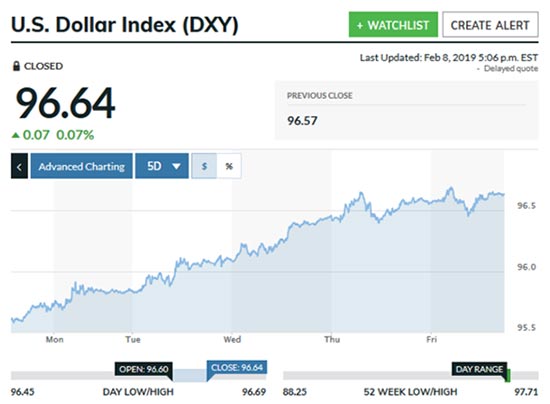 By Thursday (Feb. 8) the DXY had reclaimed the 96 level, but gold rebounded along with it, both favored as safe havens as markets sold off. Gold closed at $1,309.

And on Friday (Feb. 9), with flat stock markets and a sideways dollar, gold gained again, climbing steadily to close the week at $1,314.

But as I said before, this is a good sign. Gold prices consolidate before moving higher, and that's been the consistently bullish pattern for gold prices.

How High the Golden Staircase Will Carry Gold Prices