Another government shutdown was averted thanks to a last minute deal in Congress. But Washington merely delayed the inevitable. The reality is they've solved nothing and potentially created an even bigger crisis. 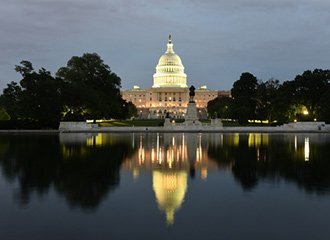 And I'm not talking about the "national emergency" declaration either. While that will surely become a media controversy and wind up in courts, the real emergency will come in September.

That's when Congress's stop-gap funding deal runs out of money, leading to another government shutdown if a new deal isn't reached. With seven more months of divided government and the "emergency" wall funding winding its way through courts, the probability of the two sides agreeing to avert a shutdown is low.

The debt ceiling will be reinstated on March 1, which means Congress will have to make another deal to ensure the government doesn't default on its obligations.

A government default would be an unprecedented financial disaster.

And yesterday's agreement to avoid a government shutdown makes it more likely...

The debt ceiling is a self-imposed limit on how much the government can borrow. The government runs a deficit and must borrow money to fund its operations, which include everything from Medicare to the military to interest on the debt.

If Congress fails to raise the debt ceiling by March 1, it will trigger three events that could ratchet up global uncertainty and threaten stock gains.

First, it will force the Treasury department to halt treasury bond payments. This could cause the nation to default on its debt obligations and will likely result in the nation's credit rating being lowered.

Secondly, as a result of a lower credit rating, the U.S. dollar will lose its status as the world's reserve currency, sending inflation through the roof as dollars flood the markets.

The government will be able to temporarily avoid these consequences by using "extraordinary" measures to keep making payments. But these measures merely delay the eventual crisis.

And what makes this crisis even worse is that the government could delay a default until the next shutdown battle in September.

The debt ceiling fight of 2013 lasted nearly a year, with the Treasury Department using "extraordinary measures" to fund the government for seven months.

If the Treasury Department has to resort to seven months of "extraordinary measures," the debt ceiling fight will roll right into the next government shutdown fight. That will be a perfect storm of financial calamity.

We have little confidence politicians in Washington can find a way to compromise to avoid the financial disaster this would create.

But that doesn't mean you can't be prepared.

In fact, you might even be able to prosper during this perfect economic storm...