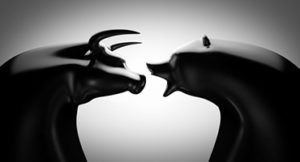 If you've been sitting on the sidelines waiting for buying opportunities, it's not too late to jump back in. So we've got five stocks we like today...

Here are all the names of our best stocks to buy now...

Best Stocks to Buy Now, No. 5: When It Comes to Apple, Separate the Signal from the Noise

Anyone who has doubted the ability of Apple Inc. (NASDAQ: AAPL) to keep producing big returns probably hasn't been following us.

Now, to be fair, analysts might have been right to be concerned about iPhone sales, which had been declining before the company decided to stop reporting unit sales beginning this year.

But as Money Morning Chief Investment Strategist Keith Fitz-Gerald told readers in October 2017, Apple is no longer a device company. In fact, it hasn't been a device company for years.

Over the last several years, Apple has been putting its services more front and center. And while iPhone sales have stalled, Apple's revenue from services has consistently shined quarter after quarter - not to mention dwarfed those of competitors like Amazon.com Inc. (NASDAQ: AMZN) and Netflix Inc. (NASDAQ: NFLX).

In fact, last quarter, the company nearly hit the $10 billion mark in services revenue for the first time. (Technically it was $9.98 billion.)

As exciting as that is, the real story - and the real money to be made - is Apple's next step. That's a step into the healthcare market, which Keith calls the "most lucrative market in the world."

Keith was telling readers about this transition over a year ago. And on Jan. 8 of this year, Apple CEO Tim Cook said in a CNBC interview that "improving people's health will be Apple's greatest contribution to mankind."

The company has hired dozens of doctors spread across multiple divisions to aid this new venture. And it has already unveiled ResearchKit and CareKit, frameworks for developers to create new research and healthcare apps. And the Apple Watch is already able to monitor a user's heart rate and detect any irregularities.

But that's just the beginning. There are more innovations on the way from Tim Cook and company - including a likely move into insurance. Which is why any hand-wringing over iPhone sales is completely missing the point.

"The sooner you focus on what Cook is saying," Keith says, "the sooner you'll start lining up profits of your own."

Best Stocks to Buy Now, No. 4: This Fund Will Deliver Absolute Gains Regardless of What the Stock Market Does

Regardless of whether the stock market goes up, down, or sideways, there will always be movements that create profit opportunities.

That's especially true when it comes to mergers.

You've probably seen how announcements, or even just rumors, of merger deals can move the stock prices of both companies involved, usually in predictable directions. Whether or not the deal goes through plays a big role in where those stock prices will settle relative to each other.

If you can reliably predict whether the merger will go through or not, you can make a boatload of money no matter what's going on in the rest of the market.

It's called "merger arbitrage." And if it sounds difficult to do the research and calculation that it entails, that's okay. That's why we've got a pick that handles all that - and hands you the profits.

I want to receive information on best stocks

Yes, I agree with you that Apple offering a health plan will be a
wonderful plan. I, myself, would consider joining it. Please keep me
informed of this health plan.

LOOKING FOR THE EDGE ON THE TOP STOCK TIPS/ PICKS

please keep me inform I need a stream of income

I want to be an investor who realizes 6 to 7 times monetary growth in IPOs, mergers, and online trading.